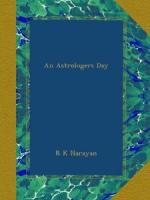 R. K. Narayan
This Study Guide consists of approximately 44 pages of chapter summaries, quotes, character analysis, themes, and more - everything you need to sharpen your knowledge of An Astrologer's Day.

1940s: India is still under colonial rule, gaining independence in 1947.

1970s: India has resolved many of its internal and external disputes and taken an active part in the creation of Bangladesh.

1970s: India is still a controlled economy but major advances are occurring in the shift to urban life.

1990s: India has become technologically advanced and very urban in its structure.

1940s: In terms of gender relations, Indian society is very patriarchal in its outlook.

1990s: Women's movements are very active in the country and major changes have occurred in gender equity. While the country is still patriarchal in many ways, women play a far...

More summaries and resources for teaching or studying An Astrologer's Day.

An Astrologer's Day from Gale. ©2005-2006 Thomson Gale, a part of the Thomson Corporation. All rights reserved.