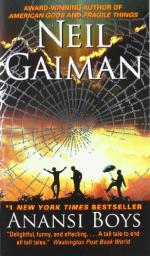 Neil Gaiman
This Study Guide consists of approximately 25 pages of chapter summaries, quotes, character analysis, themes, and more - everything you need to sharpen your knowledge of Anansi Boys.

In African and West Indian indigenous folklore, Anansi is the spider god who created the universe. From that core myth, the author spins a fictional web of imagination in which the spider god's two sons, Fat Charlie and Spider, seek and find each other in different corners of the world. Unsurprisingly, the two sons have adopted Nancy, a variation on the name of Anansi, as their surname. They are joined in supernatural adventures that defy common notions of time, space and probability. These encounters within their own black culture and the culture of the white mainstream society generate humorous, thought-provoking and often absurd consequences. The coexistence of their godly abilities alongside the everyday world of the familiar suggests a kind of magical realism found in the works of other writers such as Gabriel Garcia Marquez and Isaac Bashevis Singer, although this genre is commonly referred to as fantasy fiction.

Londoner Fat Charlie (who is not fat), learns that his father, Anansi, has died in Florida and puts his wedding plans with Rosie Noah on hold while he goes to bury his father. After he returns, though, he whispers through an alcoholic haze to a spider that he wishes his brother would visit. Oddly enough, the dapper Spider Nancy knocks on Fat Charlie's door the next morning and stays for a lengthy visit during which he seduces the virginal Rosie. After a night of prodigious drinking, Charlie is too hung over to go to work but his brother disguises himself as Charlie and goes to work for him at the Grahame Coats Agency where Spider discovers that Grahame Coats routinely embezzles from his clients. He confronts Coats with his criminal activity; Coats offers him a cash payment and a vacation which Charlie uses to return to Florida to ask old friends of his father for help in evicting Spider from his life.

When he comes back to London, Fat Charlie is arrested and thrown into prison in a frame-up engineered by Grahame Coats to place the blame for embezzlement on him. Grahame Coats flees to the Caribbean island of Saint Andrews; Spider arranges for the release of his brother.

Maeve Livingstone, a client of Coats who learns of his theft of her husband's royalties, confronts Coats in his office and he promptly kills her with a hammer, hiding her body in his office. Maeve resists the entreaties of her late husband to enter the afterlife so they can be together because she wants revenge on Grahame Coats. In her torment, Maeve meets the ghost of Anansi who tells her that the god Tiger once owned all the stories and songs, but he tricked Tiger into giving them to himself. As a result, these tales morphed from dark and violent to stories that demonstrate cleverness and imagination.

The undead Maeve Livingstone kills Grahame Coats and returns to the afterlife with her husband. Charlie becomes a singer and marries police officer Daisy Day. They have a son. Spider, who betrayed his brother, marries Rosie, and operates a restaurant in London.

More summaries and resources for teaching or studying Anansi Boys.