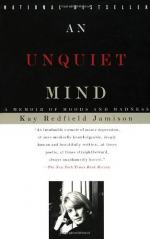 Kay Redfield Jamison
This Study Guide consists of approximately 32 pages of chapter summaries, quotes, character analysis, themes, and more - everything you need to sharpen your knowledge of An Unquiet Mind.

This detailed literature summary also contains Topics for Discussion and a Free Quiz on An Unquiet Mind by Kay Redfield Jamison.

In this emotionally-charged memoir, Kay Redfield Jamison recounts, not only her own struggles with manic-depressive illness (also known as bipolar mood disorder), but also how she has been able to use her disease to treat others similarly affected and to crusade for better understanding of the illness. A professor of psychiatry at Johns Hopkins University School of Medicine, Jamison had learned to manage her disease and become a world expert on manic-depression by the age of forty.

To set the mood of the book, Jamison opens with a scene in the UCLA Medical Center parking lot at 2 a.m. She and a colleague from the medical school race furiously around, looking for their car after an evening of drinking, fighting, laughing, and general hysteria associated with one of her manic episodes. While she was still charged with energy, her companion had crashed an hour earlier and just wanted to go home. As they crash through the parking lot, a campus policeman pulls up and asks who they are and what they're doing. "Oh, we're both on the faculty at the psychiatry department," she answers. And the policeman slowly drives away.

There are other hilarious moments throughout the book, as well as excruciatingly sad and painful moments, as the reader gets to take the same merry-go-round ride of insanity with Jamison. An excellent writer and poet, Jamison's understanding of manic-depression and the creative process resulted in the award winning Touched with Fire: Manic-Depressive Illness and the Artistic Temperament. She was also producer and writer of a series of public television specials on manic-depressive illness and the arts.

By presenting the subject in the form of a personal memoir, Jamison can freely relate to the reader how her emotional "ups" were at first pleasantly intoxicating, giving her more confidence, energy and clarity than she'd ever known. However, they were followed by periods of debilitating depression. Then her manic cycles became frightening, as she slipped into a complete detachment from reality and fully into the grip of her psychosis. The depressive part of her illness also intensified as she contemplated, and attempted suicide, believing that her own body was rotting.

The child of an Air Force pilot and meteorologist, whose moods provided a dramatic backdrop to the events of her family's daily lives and a socialite mother from an old New England family, Kay Jamison revered her older brother and found her sister barely tolerable. Witty, moody and blunt to the point of hurtfulness, her sister was a reckless youth who drank, smoked and went around with boys in fast cars. Kay was busy being the perfect scholar, cheerleader and class valedictorian. Her nuclear family moved often because of her father's Air Force duties, but eventually settled in the Washington, D.C.

By the age of 17, Jamison had experienced her first manic episode—a giddy sense of exhilaration and high energy that was intoxicating; but it bore no hint of the utter madness of which it was a foreshadowing. A senior at a California high school, Jamison was filled with a sense of the beauty and wonder of life, determined to tell all her friends about it incessantly. She wrote poetry and raced around like a squirrel in a cage until her friends began telling her to slow down, get a grip and chill out. Finally, the bloom came off the mania and she did stop. She fell into a depression that left her unable to function or focus at school or anywhere else.

The pattern repeated itself through college, until she sought help from a psychiatrist and began taking lithium. Like many with bipolar disorder, she didn't like the effects of lithium although —or because—it evened out her moods. Craving the high energies and even higher moods of her manias, she stopped taking the one drug that could save her life. She attempted suicide by ingesting handfuls of lithium, but was saved by a visit to the ER. For many years, she struggled with taking her medication, until she finally found a way to fine-tune her dosage level. Relationships, jobs, finances went on a roller-coaster ride along with her moods.

She completed a PhD in psychology with a focus on mood disorders, especially manic-depression, and became a professor of psychiatry at the Johns Hopkins University School of Medicine. She co-wrote a book that has become the standard textbook on manic-depressive illness. She is also a world expert in the field and the recipient of numerous awards. Jamison is currently a member of the National Advisory Council for Human Genome Research and clinical director of the Dana Consortium on the Genetic Basis of Manic-Depressive Illness.

More summaries and resources for teaching or studying An Unquiet Mind.