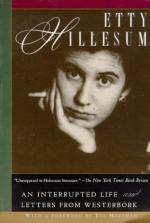 An Interrupted Life: The Diaries of Etty Hillesum, 1941-1943 Setting & Symbolism

Etty Hillesum
This Study Guide consists of approximately 25 pages of chapter summaries, quotes, character analysis, themes, and more - everything you need to sharpen your knowledge of An Interrupted Life.

Deventer is the town where Etty Hillesum lived with her family until she was in her twenties.

Built by the Dutch Ministry of Justice in 1939 to house German refugees who had fled to the Netherlands. In 1942, German authorities assumed control of Westerbork and turned it into a concentration camp ("Durchgangslager"). Jewish men, women, and children held at Westerbork were most often transported to other camps for extermination. Westerbork and the town for which it was named are located in the northeastern Dutch province of Drethe.

Amsterdam is a large city in the Netherlands. When Etty's diary begins, she is living in Amsterdam.

A region in Poland.

A bookstore that specialized in Communist literature.

Site of a training center for the Dutch SS. The 150 or so Jewish prisoners used to build the new sports fields at Ellecom were later transported to Westerbork.

More summaries and resources for teaching or studying An Interrupted Life: The Diaries of Etty Hillesum, 1941-1943.