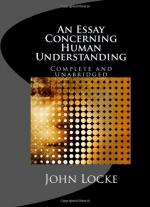 John Locke
This Study Guide consists of approximately 26 pages of chapter summaries, quotes, character analysis, themes, and more - everything you need to sharpen your knowledge of An Essay Concerning Human Understanding.

This detailed literature summary also contains Topics for Discussion and a Free Quiz on An Essay Concerning Human Understanding by John Locke.

John Locke's An Essay Concerning Human Understanding is a major work in the history of philosophy and a founding text in the empiricist approach to philosophical investigation. Although ostensibly an investigation into the nature of knowledge and understanding (epistemology) this work ranges farther afield than one might expect. Instead of just being merely a work in epistemology, this is really a reappraisal of many traditional philosophical questions, metaphysical, epistemological, ethical, and religious.

Locke begins his work in Book I by explaining the origin of the content of understanding, ideas. Ideas originate only from experience, claims Locke. His main argument in this Book is to argue against the idea that there is some knowledge that arises prior to experience, that is, the idea that some of our ideas or knowledge are innate. Locke uses several arguments against the innateness hypothesis but his main argument is that for an idea to be innate it would have to be universally shared and present in children and idiots. We can find no such knowledge and, hence, there is no reason to believe in innate ideas.

Having dealt with innate ideas and the origins of ideas, Locke turns in Book II to a detailed analysis of the content of knowledge, ideas. He categorizes ideas into simple and complex ideas. Simple ideas are generated directly by experience and refer to simple objects of sensation. Through a variety of simple procedures, simple ideas are transformed into complex ideas. These ideas can be abstracted further and further into general ideas. Locke then goes on to describe the multitude of ways our minds can operate on simple and complex ideas to generate what we think of as many other faculties and content of the mind. There is a short digression on the active and passive powers and an argument for a kind of compatabalism regarding free will. There is also an analysis of good and evil into pleasure and pain. Finally, Locke tries to account for false and fantastical ideas.

Book III deals with the signs that we use to communicate ideas to ourselves and to others, words. Book III follows roughly the same form as Book II, explaining how the different kinds of ideas can be communicated as different kinds of words. Towards the end of the Book, Locke discusses the importance of words to philosophy and to truth in general.

Book IV concerns knowledge generally and Locke spends the section explaining how our ideas, derived from experience and our words can account for our knowledge of various things. Locke also gives a unique empiricist proof of the existence for God and a strong attack on the possibility of faith and revelation. Finally Locke concludes by laying out a program for the future development of science along Lockean, empiricist lines. Many attempt to follow his trail, including David Hume and many modern philosophers. Though this work is idiosyncratic, it is hard to overemphasize its influence on philosophy and the development of thought over the last several hundred years.