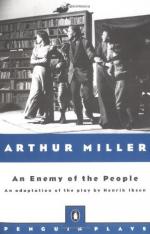 An Enemy of the People Summary & Study Guide

Arthur Miller
This Study Guide consists of approximately 30 pages of chapter summaries, quotes, character analysis, themes, and more - everything you need to sharpen your knowledge of An Enemy of the People.

An Enemy of the People Summary & Study Guide Description

An Enemy of the People Summary & Study Guide includes comprehensive information and analysis to help you understand the book. This study guide contains the following sections:

This detailed literature summary also contains Topics for Discussion and a Free Quiz on An Enemy of the People by Arthur Miller.

"An Enemy of the People," a play by Arthur Miller adapted from the drama by Henrik Ibsen, focuses on a conflict between two brothers, Dr. Tom Stockmann and Peter Stockmann, and a conflict between the freedom and the suppression of speech. The Stockmanns live in an unnamed town that has recently completed construction of a medicinal bath on the outskirts of town known as the Kirsten Springs. Peter Stockmann is the mayor of the town and is boasting about the potential benefits that the Springs will provide to the town. Peter envisions the Springs bringing in visitors and tourists, which will increase the town's revenues, provide sufficient jobs for the population and make business boom. Peter has hopes that his town will ultimately become known as one of the region's top resorts.

Dr. Tom Stockmann is a medical doctor and a scientist. Tom has recommended against the town building the Springs in the location they have selected. However, Peter and the other Council members ignore his advice. Tom comes to suspect that the water that poured into the Springs might be contaminated. Tom does not reveal his concerns to anyone since he does not want to unnecessarily alarm anyone in case he is wrong. Tom sends water samples away to a University for analysis. The University's report reveals that the water is contaminated with an infection of organic matter. The editor of the local newspaper, Hovstad, gets wind of the report and wanted to publish it in his newspaper. Tom asks the editor to delay printing the report until he informs his brother, the Mayor, about its contents. He is certain that his brother will want the report published so that the townspeople can be warned about the health risk.

After Peter reads the report, he meets with Tom to discuss it. Peter is upset that Tom chose to investigate the quality of the water behind his back. He thinks that the report is exaggerated and that Tom wants to undermine Peter's position because he despises authority. Tom is a brilliant and respected doctor who apparently has always outdone his older brother. Not only is Peter confronted with an ugly truth that could destroy his dreams of the town turning into a wealthy and popular tourist stop, he must grapple with his own personal demons in dealing with his accomplished brother.

Peter spreads the word that his brother wants to ruin the town. The townspeople, who don't want to face the ugly prospects that the water report represents, chooses to believe Peter and ostracize Tom. Tom is not allowed to publish his report in the newspaper nor speak in a public venue about the dangers that exist in the town's water supply. No matter what Tom is confronted with, whether it is isolation, threats of violence and arrest, loss of income, and even being named "an enemy of the people," Tom will not abandon the truth and winds up fighting the entire town to do the right thing that is best for the town and for its people. Although when the play ends, Tom and his family are outcasts in the town, he is certain he has chosen the correct path. Although his fight for the truth is a lonely one, he knows in the end that he is doing the right thing and that it will make him stronger.