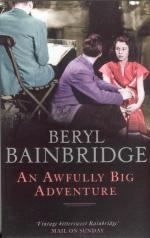 This detailed literature summary also contains Topics for Discussion and a Free Quiz on An Awfully Big Adventure by Beryl Bainbridge.

Stella lives with her Uncle Vernon and Aunt Lily in their boarding house in Liverpool, England. She is a willful young woman with a lively imagination. Stella is unable to complete her formal schooling due to her inability to concentrate on her studies. Uncle Vernon is sure that the theater is a perfect way to channel her imagination and her emotions. He uses his connections with the theater manager's brother to get Stella an audition.

Almost immediately, Stella is infatuated with the theater's handsome director, Meredith Potter, who hires her as an apprentice. She runs errands, works backstage, does a bit of acting and performs a number of other duties. The members of the theater company are soon charmed by Stella. She is very talkative and loves to tell stories. They enjoy her napve attempts at sophistication and her bright, bold spirit. Stella is delighted to be welcomed as a member of this creative family.

Although Stella's beloved Meredith seems oblivious to her romantically, several of the adult males in the company find her more than attractive. Two of them make inappropriate advances, but Stella takes it in stride. It occurs to her that it would be a good idea to practice so that she'll be a good lover when Meredith is ready for her. Because of this, she reciprocates when young Geoffrey makes some advances, but she really doesn't care for him and finally pushes him away.

The members of the company have many personal challenges, and - as one would expect with people of the theater - their personal lives are often melodramatic. In the midst of it all, the theater season is a great success until the lead actor, Richard St. Ives, breaks his leg just before the opening of Peter Pan. P.L. O'Hara, an excellent actor with a bit of fame in the repertory circuit, is called in to play the pivotal role of Captain Hook.

O'Hara has a long history with this company and with Liverpool. The memories it evokes for him are painful yet sweet. O'Hara finds himself drawn in a familiar way toward Stella. Stella realizes that he is the perfect person to give her some experience, and she easily offers him her virginity. O'Hara falls in love with her, but Stella makes it clear that she loves another and is just practicing with O'Hara.

O'Hara's passion for Stella leads him to the boarding house, where in a conversation with Uncle Vernon and Lily he realizes the awful truth. Stella is his own daughter by his long lost love from years ago.