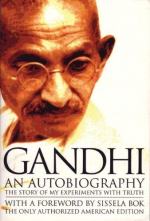 An Autobiography: The Story of My Experiments with Truth Setting & Symbolism

India is the birthplace of Gandhi and the setting for part of the book. It begins in Porbandar where Gandhi is born and grows up, and shifts around to Bombay, Calcutta, Benares, Agra, Jaipur, Madras and other locations as Gandhi travels around the country.

The London area is where Gandhi goes to receive his education. He passes his law exams and is enrolled in the British High Court.

Paris is the sight of the Exhibition that Gandhi goes to. The Eiffel Tower is built for this Exhibition.

Gandhi spends ten years in South Africa, first working for a law firm, and then working at his public works. He travels around Africa from Natal to Pretoria and Johannesburg and other places.

This is the ship on which Gandhi sails to Calcutta. While sailing he studies the languages of Urdu and Tamil...

An Autobiography: The Story of My Experiments with Truth from BookRags. (c)2022 BookRags, Inc. All rights reserved.