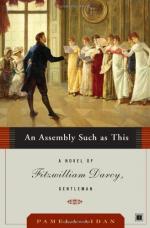 Plot Summary
+Chapters Summary and Analysis
Chapter 1, At Such an Assembly as This
Chapter 2, A Man of Property
Chapter 3, En Garde!
Chapter 4, Intermezzo
Chapter 5, To Know More Of Her
Chapter 6, Feint and Parry
Chapter 7, Dueling in Earnest
Chapter 8, His Own Worst Enemy
Chapter 9, The Illustration of His Character
Chapter 10, Beyond the Pale
Chapter 11, Certain Evils
Chapter 12, All That Glitters
Chapter 13, The Wounds of a Friend
Free Quiz
Characters
Objects/Places
Themes
Style
Quotes
Topics for Discussion
Order our An Assembly Such as This Study Guide

An Assembly Such as This Summary & Study Guide

Pamela Aidan
This Study Guide consists of approximately 52 pages of chapter summaries, quotes, character analysis, themes, and more - everything you need to sharpen your knowledge of An Assembly Such as This.

An Assembly Such as This Summary & Study Guide Description

An Assembly Such as This Summary & Study Guide includes comprehensive information and analysis to help you understand the book. This study guide contains the following sections:

This detailed literature summary also contains Topics for Discussion and a Free Quiz on An Assembly Such as This by Pamela Aidan.

"An Assembly Such As This" by Pamela Aidan is the first part of a trilogy retelling Jane Austen's classic, "Pride and Prejudice." Darcy, an upper-class gentleman, tries to fight his attraction for Elizabeth Bennet, a young lady with unacceptable relations; simultaneously, Darcy tries to dissuade his friend, Charles Bingley, from pursuing Jane Bennet, Elizabet's sister. "An Assembly Such As This" brilliantly retells one-third of the renowned tale about Fitzwilliam Darcy and Elizabeth Bennet from Darcy's point of view.

At the Meryton assembly, Bingley meets and dances with the most handsome lady in the room, Miss Jane Bennet. Meanwhile, Darcy insults Jane's sister, Elizabeth, by stating that she is "not handsome enough to tempt me," though he finds her intriguing. Returning to Netherfield, Darcy is happy to receive a letter from Georgiana, his younger sister, that expresses her recovery from last summer's fiasco with George Wickham. Darcy rides out to escape from Miss Bingley's attention and returns to discuss business about Netherfield with Bingley. During their afternoon repast with the ladies, Bingley praises Janet Bennet, and Darcy and Bingley's sisters try to discourage him from showing attention to the young lady. Miss Bingley, mocking the Bennet sisters, asks Darcy's opinion about Elizabeth being a beauty; Darcy dissents.

Bingley is eager to see Jane again as people make visits to Netherfield. When the Bennets arrive, Elizabeth treats Darcy coldly, and he fears she overheard his remark at the assembly but refuses to lay himself open by apologizing. At dinner, Miss Bingley and Mrs. Hurst mock their country neighbors, and Darcy makes it apparent that Miss Elizabeth Bennet is not his idea of perfection in a woman. The Netherfield party attends a dinner at Squire Justin's house where Darcy closely watches Elizabeth whom he admires. When Squire Justin praises Elizabeth to Darcy, Darcy is embarrassed that his attraction is evident. During the party at Lucas Lodge, Elizabeth again treats Darcy coldly, but she intercepts his path when he attempts to intervene between Bingley and Jane's tete-a-tete. In a conversation with Miss Bingley, Darcy remarks upon Elizabeth's "fine eyes."

While Darcy and Bingley dine at Colonel Forster's, Miss Bingley has Jane over for dinner. Jane becomes ill from riding her horse to Netherfield in the rain. She stays at Netherfield for her recover, and Elizabeth arrives to nurse her sister. Darcy is discomfited by Elizabeth's proximity but eager to cultivate his acquaintance with her. Miss Bingley and the Hursts are rude to Elizabeth during her stay. When Mrs. Bennet and her three youngest daughters arrive, Darcy disapproves of their rudeness since it embarrasses Elizabeth. Feeling better, Jane joins the Netherfield party in the drawing room where Bingley occupies her attention. Miss Bingley flirts with Darcy, and Darcy tries to flirt with Elizabeth who grows irritated. Jane recovers quite well, and she and Elizabeth leave Netherfield.

Bored without Jane and Elizabeth, Bingley and Darcy decide to go to Meryton and then visit Longbourn, but they encounter the Bennet sisters in Meryton with Mr. Collins and Wickham. Wickham's presence angers Darcy. Darcy decides to avoid Elizabeth Bennet until the Netherfield ball when he may procure her hand for a dance. At the ball, Darcy, astounded by Elizabeth's beauty, asks her to dance, and she accepts confusedly. During their dance, Darcy and Elizabeth talk, and she makes it evident that she disdains Darcy for ruining Wickham's life by withdrawing his friendship; Darcy worries about what Wickham is telling everyone about their relationship. Miss Bingley appeals to Darcy for help in separating Bingley and Jane, and Darcy comes up with a plot for this.

The day after the ball, Darcy and Bingley go to London where Darcy dissuades Bingley from buying Netherfield and claims that Jane is indifferent to him. Darcy handles business and plans to attend Lady Melbourne's soiree with Bingley. Darcy's friend, Dy, visits Darcy, and Darcy enlists his aid in a game of subterfuge to extricate Bingley from Jane Bennet. At the soiree, Bingley dances with Miss Cecil while Darcy talks to the gentlemen in the drawing room until Lady Melbourne's daughter-in-law causes a scene. Darcy, Dy and Bingley return to Erewhile House where Dy tells a story about knowing one's ground. As Dy leaves, he claims that the story was meant to warn Darcy to be sure of his intentions in separating Bingley and Jane. Bingley heeds Dy's counsel wistfully before leaving Darcy. Darcy wonders if his own interest in separating himself from Elizabeth fuels his plot against Bingley and Jane. Darcy imagines Elizabeth's face in from of him and tells her to leave because he is Bingley's deliverer.

An Assembly Such as This from BookRags. (c)2021 BookRags, Inc. All rights reserved.