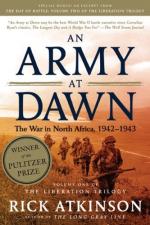 An Army at Dawn is told in the second person. The point of view is taken from press accounts, interviews and troop letters home (the notes section at the end of the book is extensive). It is a play-by-play account of how the war in North Africa came to transpire and the character interaction that occurred between the leaders.

The story follows the North African conflict of World War II and is set in the countries of Tunisia, Algeria, and Morocco. The locations of the Allied landings are discussed in detail, as well as the battle sites themselves. Although North Africa is the main site of action, the book also includes side events that transpire all over the world, from Berlin to the United States.

Atkinson moves rapidly from an overview of event planning by commanders to actual troop transcripts, which he...