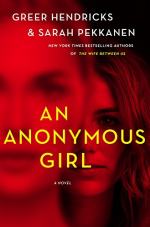 Related Topics
The Wife Between Us

Greer Hendricks and Sarah Pekkanen
This Study Guide consists of approximately 80 pages of chapter summaries, quotes, character analysis, themes, and more - everything you need to sharpen your knowledge of An Anonymous Girl.

This detailed literature summary also contains Quotes and a Free Quiz on An Anonymous Girl by Greer Hendricks and Sarah Pekkanen.

The following version of the novel was used to create this study guide: Hendricks, Greer, and Pekkanen, Sarah. An Anonymous Girl. St. Martin’s Press, January 8, 2019. Kindle.

In the psychological thriller, An Anonymous Girl by Greer Hendricks and Sarah Pekkanen, love, money, and obsession collide with deadly results as psychiatrist Dr. Lydia Shields sets out to test the fidelity of her estranged husband, Thomas. In order to test her hypothesis, Shields hones Jessica “Jess” Farris, a troubled young woman who participates in one of Shields studies, to serve as bait for Thomas. Shields does not anticipate that Jess and Thomas will meet outside the parameters of her experiment and have a sexual encounter before they are aware of their relationship to Shields. The resulting triangle threatens to destroy them all.

Jess becomes a subject in one of Shields’ studies when she learns that a girl for whom she is doing makeup is planning not to attend her appointments. Because Jess is trying to support herself and help her family with therapy for her sister, Becky, Jess feels she is not able to pass up the opportunity to earn $500 to participate in the study. The story alternates between the point of view of Jess and Shields as they interact with each other through the course of the study. After Shields determines that Jess is the sort of woman to whom Thomas might be attracted, she gets Jess to agree to participate in more in-depth studies.

Shields begins face-to-face sessions with Jess in which Shields gains Jess’ trust by getting her to talk about Jess’ role in her sister, Becky’s, traumatic brain injury. Jess believes that because she was supposed to be watching Becky but had instead snuck away to go to the corner market that it was her fault that Becky was hurt. Shields tells Jess that she was not at fault in Becky’s injury. She comforts Jess by putting a cashmere wrap around Jess in an act that seems impulsive and loving. In reality, Shields had already bought herself a new wrap to replace the one she gave to Jess. The act was not spontaneous at all but one intended to make Jess feel as if Shields cared for her and accepted her.

After Shields gained Jess’ trust, she used Jess to recreate the night that a woman approached Thomas and seduced him. Thomas had argued that no man would be able to say no to an attractive woman if she threw herself at him. The man whom Shields had Jess approach in the bar, however, does say no to Jess.

Shields next decides to arrange a meeting between Jess and Thomas. She does not realize that Jess meets Thomas outside the museum to which she sent Jess with the intention of her meeting Thomas inside at a photography exhibit. Thomas and Jess assisted an elderly woman who was hit by a car outside the museum. Jess gave Thomas her phone number so he could update her on the lady’s condition. When Thomas contacted Jess, they went out for drinks and then back to Jess’ apartment for sex.

After this, Shields set Jess up again to meet her husband. When Jess saw Thomas, she realized she had already slept with the man Shields wanted her to seduce. She did not know that Thomas was Shields husband until he called and asked for whom she was working. He claimed that Shields was crazy and that Jess needed to be careful. Thomas claimed to Jess that he was trying to get a divorce from Shields. When Jess followed Thomas and Shields one night that Thomas said they were going to visit their lawyer, Jess saw that they instead went to a romantic restaurant to eat.

As Jess tried to understand the relationship between Thomas and Shields, Jess learned that Thomas had an affair with April, a girl who had seen him as a psychiatrist for one session. April later got a spot in Shields’ study in order to find out what Shields was like. The two developed a close relationship but Shields did not know that April was the one with whom Thomas had an affair until April confessed to her. Shields, who had gotten to know April’s history and her weaknesses, manipulated April into believing that she was nothing. She convinced the young woman to commit suicide.

In a final confrontation between Shields, Thomas, and Jess, Jess confronts Shields with the fact that she knows that Shields convinced April to commit suicide. Shields claimed she had done so not only out of anger but also to protect Thomas’ reputation. If anyone learned that he had slept with a patient, he would lose his license. Still believing that she is protecting Thomas, for whom she had an obsessive love, Shields confesses on paper to killing April. She later kills herself.

Jess shocks Thomas a few weeks later when she asks him to meet her for drinks. Instead of a social visit, Jess manipulates Thomas to pay her damages for what Shields did to her in exchange for staying quiet about his affair with April.

More summaries and resources for teaching or studying An Anonymous Girl.