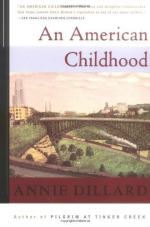 Annie Dillard
This Study Guide consists of approximately 29 pages of chapter summaries, quotes, character analysis, themes, and more - everything you need to sharpen your knowledge of An American Childhood.

This detailed literature summary also contains Topics for Discussion and a Free Quiz on An American Childhood by Annie Dillard.

Anne Dillard, now a middle-aged woman, recalls her childhood, from the time she was five all the way through high school. Over these years, she provides her own childhood as a model for happiness in adulthood. Adult needs not leave behind the spirit that causes children to stand in perpetual awe of the world; rather, to be truly happy, one must resist the world's attempt to stamp that spirit out.

The account begins with what are probably Anne's youngest memories. She is a five year old who is just starting to be conscious of herself and the world around her. She compares the differences between herself and her parents, how their skin is loose and saggy, while her own is beautiful and taut. She loves her parents but is especially enthralled by her mother. Her mother is a vibrant, brilliant woman who, by the conventions of the 1950s, is locked away in the household, destined to be a housewife until she dies. She amuses Anne and her sisters constantly with clever jokes and elaborate pranks. During these early years of Anne's life, her father quits his job and attempts to take a boat down the Mississippi to New Orleans. The voyage fails, however; it is too long and too lonesome. He sells the boat and returns home.

As a child, like any other child, Anne is filled with curiosity. The world amazes her and what might seem mundane to others is often an object of intense study for her. During these childhood years, Anne studies, among other things, the French-Indian War, mineralogy, biographies of famous biologists, insects, drawing, and forensics. As she grows up and becomes more aware of the way the world works, she realizes that hardly any adults retain this same spirit of wonder. Most get married, find jobs, and work until they die. However, Anne finds hope in some few individuals, most of all, her mother.

As Anne grows older and enters into adolescence, she watches with horror as she starts to turn into an adult. Boys had always delighted her and she would look at them with awe, but now they had a different, more mature appeal to her. As she started high school she become obsessed, like all her friends, with wearing the most fashionable clothes and having the best tan. This fixation on worldly pursuits coincides with a darkening of her world. For the first time in her life—at least, for any extended period of time—Anne is unhappy. She seems to have lost the childish wonder of years past which made her so happy, and she nearly resigns herself to her fate. She is filled with anger during these years, though it is not clear towards what. As a result, she starts getting into trouble. She gets into a drag-racing accident, starts smoking, and writes a letter to the church's Reverend, angrily citing the reasons why she is quitting the church. As the story ends, Anne is finishing high school and preparing for college life.

Lest the book ends in this gloomy fashion, the epilogue vindicates the curiosity of young Anne. It is necessary to compromise with the world after all. Rather, Anne found that she could be happy, no matter what her circumstances and no matter how old she is, by simply living in her own consciousness and admiring the beauty of the world as it is.

More summaries and resources for teaching or studying An American Childhood.