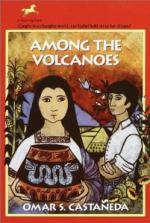 Compare & Contrast Among the Volcanoes by Omar S. Castaneda

Guatemala: Illiteracy rates are among the highest in Central America in 1998: 44 percent of all Guatemalans over the age of fifteen are illiterate (51.4 percent of women and 37.5 percent of men).

United States: Illiteracy has been widely eliminated by 1998. Still, 2.4 percent of Americans over the age of twenty-five are functionally illiterate. This means they cannot read or write well enough to perform daily tasks.

Guatemala: Only 58 percent of primary-school aged children in 1998 attend school, despite the fact that it is free and mandatory. At the secondary level, this number drops to 16 percent.

United States: Education is more available than ever in 1995: 82 percent of Americans over the age of twenty-five have completed high school, and 23 percent of the population has finished at least four years of college.

Guatemala: In 1990 girls are expected to marry as early as their middle to late teens.

United States: The median age for...