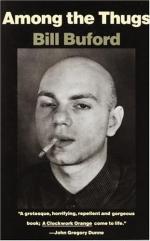 Among the Thugs Setting & Symbolism

Bill Buford
This Study Guide consists of approximately 32 pages of chapter summaries, quotes, character analysis, themes, and more - everything you need to sharpen your knowledge of Among the Thugs.

Football is the English word for the game of soccer.

During a football match, fans use a method of movement called the simple squeeze to move through the mob. This movement involves lifting an arm and slipping it through a hole between two people, and then twisting the body to slide between the individuals.

The shove is another method of movement used by individuals in a mob of people at a football game. The movement involves shoving violently into the person directly ahead in an effort to push the entire mob forward.

This is the team that competes against the Manchester United in Turin, after which the English supporters destroy part of the city.

The First National Front is a group of political...

More summaries and resources for teaching or studying Among the Thugs.

Among the Thugs from BookRags. (c)2023 BookRags, Inc. All rights reserved.