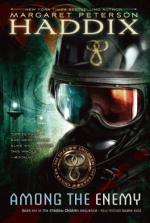 Among the Enemy Summary & Study Guide

Among the Enemy Summary & Study Guide includes comprehensive information and analysis to help you understand the book. This study guide contains the following sections:

This detailed literature summary also contains Topics for Discussion on Among the Enemy by Margaret Peterson Haddix.

Matthias, Percy, and Alia are three friends living at the Neidler School. The country has experienced a severe shortage of food and all families are banned from having more than two children. Third children are illegal and, if captured by the Population Police, are killed. Matthias, Percy, and Alia are all third children living with fake identity papers. They are roused out of their beds one night by the Population Police. They are told there is a new ruler in the country and that they are going to be given an opportunity to work for their country. They are not given a choice but are loaded onto trucks and overhear one of the guards say "the little ones" won't last long in the labor camps. The three friends manage to get on the same truck where they are all strapped in. Matthias manages to break his own strap. He finds a nail and begins trying to break through the straps of the others. When it's obvious he won't be able to free them, he drops the nail through a hole in the truck, causing a flat. The truck flips and Alia is injured but Percy and Matthias grab her and run away. They soon encounter a gunfight between Population Police and rebels and Percy is shot. With both of them injured Matthias finds a safe place in the rebel house for his friends and goes to the home of an ally, Mr. Talbot, for help.

Matthias soon discovers some people he knew are living at Population Police headquarters and that they are planning to destroy a warehouse that holds all the legitimate identification cards. Meanwhile Matthias learns that one of the officers, a man named Mike, is really on the side of the rebels. Matthias and Mike help put food in the hands of some hungry people and destroy the warehouse. Mike and Matthias escape and soon learn the Population Police are touting them as heroes in a strange turn of events. Mike plans to return to the Population Police but Matthias wants to visit Mr. Talbot first. There, he discovers Mrs. Talbot, Alia, and Percy are alive and well.

Among the Enemy from BookRags. (c)2022 BookRags, Inc. All rights reserved.