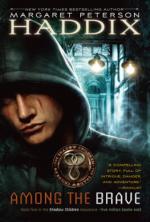 Among the Brave Summary & Study Guide

Margaret Peterson Haddix
This Study Guide consists of approximately 32 pages of chapter summaries, quotes, character analysis, themes, and more - everything you need to sharpen your knowledge of Among the Brave.

Among the Brave Summary & Study Guide includes comprehensive information and analysis to help you understand the book. This study guide contains the following sections:

This detailed literature summary also contains Topics for Discussion on Among the Brave by Margaret Peterson Haddix.

Trey is the third child of a family. Since families in the story are limited to only two children, third children are illegal and are immediately captured, jailed, or killed by the Population Police, a group organized to enforce the "third child law." Trey lived with his parents until his father's death. He was taught by his father and excels academically. However, when his father died, his mother dropped him off at a school, saying it wasn't safe for them to be together. Trey struggles with abandonment issues and can't decide if he's angrier at his mother, his father, or himself.

As the story opens, Trey is trying to make contact with a man that he and some other children believe will help him, Mr. Talbot. But before Trey can gain entrance into the house, the Population Police arrive and he narrowly escapes capture. Trey's friends escape and he lives in fear over the coming days, hiding out in the house that is now abandoned.

Trey then meets Mark, the older brother of Trey's friend, Lee, who is also an illegal third child. Mark learns that Lee has probably been captured and sets out to rescue his brother, demanding Trey's cooperation. They arrive at the house they believe will lead them to Lee only to discover it's been taken over by the Population Police. Mark attempts to get inside but is captured. Trey asks to join the Population Police as a means of getting into the house. Once he is there, he finds Mark locked in a cage but eventually makes a deal with a soldier to trade Mark's freedom for Trey's efforts to free a friend of the soldier. Trey, still disguised as a Population Police officer, sets out to do so but the road to success is filled with problems. He is attacked twice by mobs of hungry people and arrives at the prison only to discover the prisoner he's helping free as part of his deal with the soldier turns out to be Mr. Talbot. The soldier is a rebel working against the Population Police from inside.

Lee is also released and the boys, along with another soldier who helps them escape, arrive at a secret house where another friend, Mr. Hendrix, has been left alone because the police believe he can't possibly survive. Trey struggles with the idea that he's acted bravely when necessary despite his self-image as a cowardly person. Trey discovers a list of one hundred other third children and determines to volunteer for the Population Police with the hope that he can mount attacks from within. He believes the children themselves are the key to eliminating the Population Police. He's joined by several of the others, including Mark, who promises to join them as soon as he recovers from a broken leg.

More summaries and resources for teaching or studying Among the Brave.

Among the Brave from BookRags. (c)2021 BookRags, Inc. All rights reserved.