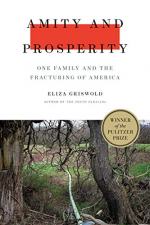 Eliza Griswold
This Study Guide consists of approximately 77 pages of chapter summaries, quotes, character analysis, themes, and more - everything you need to sharpen your knowledge of Amity and Prosperity.

This detailed literature summary also contains Topics for Discussion on Amity and Prosperity by Eliza Griswold.

The following version of this book was used to create this study guide: Griswold, Eliza. Amity and Prosperity: One Family and the Fracturing of America. Farrar, Straus and Giroux. New York, NY. 2018. First Edition. The narrative unfolds in a mostly journalistic style, with occasional first-person interjections from the author appearing within its general, documentary-like, third-person context.

The narrative begins with a Prologue that outlines the millennia-long history of fossil fuels in the Appalachia region of Pennsylvania, and the more recent, decades-long history of mining those fuels. The most recent method of doing so, according to author Griswold, is fracking, the high-pressure injection of large amounts of chemically treated water into layers of rock beneath the surface. Such injections free deposits of fossil fuels, particularly natural gas, and force them to flow to the surface, where they are collected, refined, and marketed. The Prologue also outlines the history of controversy associated with fracking, controversy joined by single mother Stacey Haney when she started to believe there was a connection between the by-products of the procedure and the ongoing ill-health of her children. The Prologue is followed by the transcription of a note left for people who had looted Stacey’s home, which she had been forced to abandon as a result of the worsening illnesses in her children.

The subsequent narrative, the main body of the book, is divided into three parts. Part 1 begins with narrative of the 2010 Washington County Fair, a centuries-old celebration of community and culture taking place in the section of rural Pennsylvania where Stacey and her family live. As the narrative begins, there are references to the ongoing health struggles of Stacey’s children, Harley and Paige; and to the presence of fracking company Range Resources at the fair, developing relationships with members of the community. The remainder of Part 1 is taken up with descriptions of Stacey researching, preparing, and presenting her case to the region’s courts; her partnership with the Voyles and others in order to give the suit more weight; and her engaging husband-and-wife lawyers John and Kendra Smith to work on the suit with them.

The Smiths, working for free, spend countless hours researching and developing all the various aspects of the suit, coming to the conclusion that Stacey’s claims are justified and that Range Resources has some responsibility to take. The process of trying to get Range to take that responsibility is the focus of Part 2, which details how the case takes shape; how Stacey’s struggles to keep her family both together and healthy start to take their toll; and how legal, economic, and political factors all start working together to keep Stacey and the Smiths from achieving their goals.

In Part 3, the narrative continues to follow the various court cases involving Stacey, her allies, and the Smiths. There are a few successes, such as the decision that forces Range Resources to release a complete list of the chemicals it uses in its fracking process; and there are failures, such as the suit brought by another citizen of the Amity/Prosperity community. Part 3 concludes with another description of the Washington County Fair – this time, the event taking place in 2016 and featuring more of a presence from Range Resources and its allies than ever.

The book concludes with an Epilogue, in which the outcome of the lawsuits brought by Stacey, her allies, and the Smiths is revealed. Stacey and the Voyles are brought into a meeting where they engage in discussions that bring them to a financial settlement with Range, in terms that cannot be disclosed because of a publication ban. With the settlement in place, Stacey, the Voyles, and their families prepare to move on with their lives, unhappy that they did not get everything they wanted but relieved that their long fight is finally over.

More summaries and resources for teaching or studying Amity and Prosperity.