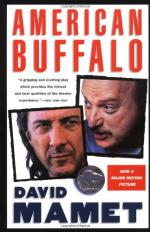 Bob is Don's "gopher" and serves him in the dual capacities of coffee-fetcher and surrogate son. While he does listen patiently to all of Don's lessons on how to "do business," the audience also learns that he frequently borrows money from him to support a drug habit. Slow-witted and dull, he is not as talkative nor excitable as Don or Teach, but he does remain faithful to Don, even after he is assaulted by Teach on the grounds that he has betrayed their robbery scheme to other thieves.

The owner of Don's Resale Shop, Don is a seller of junk who plans the robbery which drives the play's plot. He is the "business associate" of Teach and a father figure to Bob. Early in the play, he tries to instruct Bob on how to be a "stand-up guy," a conversation that reveals...