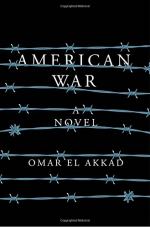 Omar El Akkad
This Study Guide consists of approximately 75 pages of chapter summaries, quotes, character analysis, themes, and more - everything you need to sharpen your knowledge of American War.

The following version of this book was used to create this guide: El Akkad, Omar. American War: A Novel. Toronto: McClelland & Stewart, 2017.

The novel begins circa 2140 as an unnamed narrator reflects on his youth and the devastating war he was born into, the Second American Civil War, which took place between 2074 and 2095. Diagnosed with cancer and nearing the end of his life, the narrator is determined to tell the story of his aunt, Sarat Chestnut, who grew up during the war and entrusted him with a burdensome secret. The narrative then returns to 2075 in St. James, Louisiana, when Sarat was six years old. Climate change has significantly altered the planet, and rising sea levels have caused large parts of America to be submerged under water. Following global trends, the American government has prohibited the use of fossil fuels. But a number of Southern States resisted the ban, triggering a secessionist movement and a civil war that tore the country apart.

Sarat lives just outside the Free Southern State in “Purple country,” with her siblings Dana and Simon, and her parents Martina and Benjamin. They reside in a salvaged shipping container and depend on foreign aid provisions from China and the Bouazizi Empire, a newly dominant entity comprised of Middle Eastern and North African states that united after the “Fifth Spring.” The Chestnut family plans to migrate to the North in the pursuit of a better life, but this plan fails when Sarat’s father is accidentally killed when trying to obtain a work permit. Martina resolves to flee with her three children to Camp Patience, a refugee camp in Mississippi. They live there for six years, during which Martina runs a business writing letters, Simon joins a rebel group, and Sarat meets a cunning erudite, Albert Gaines, for whom she runs errands.

Gaines becomes Sarat’s mentor and role model, and from him she learns about geography, culture, history, and politics. He makes her feel special by pampering her with exotic foods and gifts. She is too naïve, however, to understand that his teachings are imbued with a divisive and hate-mongering ideology. He subtly cultivates her retaliative and vengeful sense of identity by repeatedly emphasizing what that the North has taken from her. He also introduces her to Joe, a powerful connection from the Bouazizi Empire, who takes an interest in Sarat’s rebellious and ruthless personality.

A Northern militia group makes a sudden incursion on Camp Patience and brutally murders most of the camp’s refugees, including Martina. Sarat and Dana hide in an administrative building, but Sarat resurfaces to look for her mother. She witnesses the violent carnage of the massacre, which prompts her to relentlessly stab and kill a Blue soldier. She returns to Gaines in distress, declaring that she wants to kill the enemy. This pleases Gaines, because it signals that Sarat has been successfully radicalized as a Southern insurrectionist. Simon survives a shot to the head, which incapacitates him mentally and physically. The government grants the Chestnuts with a Charity House in Lincolnton, Georgia, to compensate for their injuries.

Sarat spends five years in Lincolnton with her siblings. Simon is paralyzed and cared for by Karina, a caretaker from Bangladesh. He is frequently visited by pious women and widows, who venerate him for being a “Miracle Boy.” Dana is trained by Gaines to become a sniper, and Joe provides her with a weapon that she names “Templestowe” after the Southern insurrectionist who killed the country’s President. Sarat obtains intel from a friend from Camp Patience, Marcus Exum, who had escaped to the North and became a mole. She assassinates an important Northern general, which concomitantly halts peace talks and engenders more Northern incursions. Dana is killed by a rogue drone strike, and Sarat is captured by the Northern militia when Gaines turns her into the authorities.

Sarat is taken to Sugarloaf prison, where she is held for nine years. She is asked to admit to crimes she did not commit and is crudely tortured when she does not comply. After being subjected to solitary confinement, sensory deprivation, interrogations, and waterboarding, Sarat finally concedes to the charges. The war is declared over in 2095 and Sarat is released. She returns home to Lincolnton and meets six-year-old Benjamin, who is Karina and Simon’s son and the novel’s narrator. Having suffered from psychological torment, Sarat mostly recluses herself in a garden shed.

Sarat slowly begins to reintegrate with normal life and befriends Benjamin, who develops a great affection for her. Her healing is stunted, however, when she receives visits from previous acquaintances. One of these leads her to seek revenge on a prison guard, Bud Baker, whom she kills ruthlessly in front of his family. She also meets with Joe, who suggests she take her revenge on the North by releasing a deadly and highly contagious disease at the Reunification Ceremony. He reveals that he works for the Bouazizi Empire and is assigned to ensure that America becomes a ruined and irrelevant state.

Sarat accepts the mission and sends Benjamin to an orphanage in New Anchorage, Alaska. He feels betrayed and does not understand why she removed him from his home until decades later, when he reads her diaries which she entrusted to him. He learns that she was the one responsible for the millions of deaths caused by the plague. Angered, Benjamin burns her diaries and keeps this valuable information secret until his impending death.

More summaries and resources for teaching or studying American War.