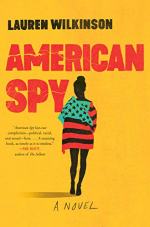 Lauren Wilkinson
This Study Guide consists of approximately 38 pages of chapter summaries, quotes, character analysis, themes, and more - everything you need to sharpen your knowledge of American Spy.

The following edition of this book was used to write this study guide: Wilkinson, Lauren. American Spy. Random House, 2018. Hardcover.

It is 1992 and Marie Mitchell, a former FBI agent, is living in Connecticut with her twin four-year-old sons. She hears a quiet intruder in the house, and uses her skills to apprehend and kill the mysterious man. Terrified that her former enemies in intelligence have identified her location, she takes her sons and flees to the tropical country of Martinique, to stay with her mother, Agathe. Marie goes on to explain that she is writing down a journal of her time in intelligence as an explanation for her sons to read when they are older.

Marie recalls her childhood in New York City, which was mostly grown up idolizing her older sister, Helene. Helene was a deeply mysterious figure who badly wanted to be in intelligence from an early age, and would do things like make a friend only to practice turning on her, as this is what spies would have to do. Helene enlisted in the military immediately after graduating high school, and later died in mysterious circumstances.

Marie went on to work for the FBI from 1983-1987, with the early years spent doing bureaucratic paperwork for her sexist boss, Rick Gold. In 1987, she is called on by CIA agent Ed Ross to trail the new communist president of Burkina Faso, Thomas Sankara, during his upcoming trip to the United Nations in New York City. American intelligence wishes to unseat Sankara. Marie initially resists the assignment, because Ross intends for her to seduce Sankara, but she agrees at the end of a contentious second meeting. When Sankara arrives in New York City he is a deeply attractive and charismatic figure, who seems to care deeply about the wellbeing of his country. After he gives a restrained speech at the United Nations, he goes with Marie to her home in Harlem, giving an impassioned speech to a group of anti-apartheid activists at a local elementary school. With Marie posing as Thomas’ guide from the United Nations, they spend much time talking during the two days, with Thomas questioning Marie’s politics, including her opinion of her own father, a lifelong NYC policeman. Although Marie receives the necessary intelligence from Sankara, regarding covert American involvement in Burkina Faso, she fails to seduce him, drawing the ire of both Ross and Gold. Gold then suspends Marie for falsifying his signature on an unrelated piece of paperwork.

Ross then quickly creates a second assignment for Marie, involving her traveling to Burkina Faso and continuing to trail Sankara. Marie agrees because Ross’ contact in the country is Daniel Slater, who had been Helene’s boyfriend at the time she had passed. For a few weeks, Marie stays at a comfortable house in the capital city of Ouagadougou, occasionally running intelligence-related errands for Slater, and showing up to small political events that Sankara also attends, continuing to establish her rapport with him. Suddenly, however, Daniel reveals to Marie that Ross employed her not as a member of the CIA but as a member of the private Security Solutions International, a private company that consists of Ross and Slater. Slater callously discusses how Helene had died in a freak automobile accident just days after her and Slater had had an impromptu wedding in Las Vegas. Slater gives Marie a small vial of poison and commands her to kill Sankara with it at the next event, which is at a wildlife refuge in the neighboring country of Ghana.

Having become convinced that Sankara’s view of the world is correct, when Marie arrives in Ghana she intentionally blows her cover, revealing all of Ross and Slater’s machinations to Sankara. Sankara suspects that the company is involved because they stand to profit off of American military bases in Burkina Faso. Marie and Sankara make love in a hotel room, with Marie conceiving her twin sons. Marie, Sankara, and Sankara’s bodyguard make the overnight drive back to Ouagadougou, arriving early in the morning. Marie goes to Slater’s house, and kills him in his bed. Slater’s girlfriend calls the police, who chase Marie (onboard a motorcycle) until she outruns them by going into the vast savannah, as she attempts to flee back to Ghana.

Marie’s motorcycle eventually runs out of gas and she is stranded in the middle of the desert. She is miraculously saved by a man who was commuting from the city out to his rural village. Marie is tended to in the village, and her motorcycle refilled with gas, and she easily completes the trip to Ghana, where she then flies to Europe. From Europe, Marie goes to Martinique, where she spends her pregnancy with her mother, eventually giving birth. Even though Ross sends a threatening package to Marie in the mail, nobody comes to harm her. Marie had gone from Martinique to Connecticut, until the events at the beginning of the novel had forced her to return to Martinique. Now, she leaves her children with her mother and prepares to return to America, where she plans to kill Ross.

More summaries and resources for teaching or studying American Spy.