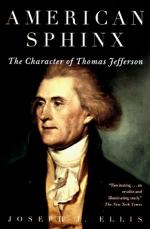 This detailed literature summary also contains Topics for Discussion and a Free Quiz on American Sphinx by Joseph Ellis.

American Sphinx traces the trajectory of Thomas Jefferson's life at key points in his career. Author Joseph Ellis focuses on Jefferson's high points of achievement. These include the writing of the Declaration of Independence, Jefferson's sojourn in Paris and his first term as president. Two of Jefferson's respites at his beloved plantation, Monticello, are also included. This technique allows Ellis to focus on Jefferson's most outstanding achievements while glossing over embarrassments such as Jefferson's term as Governor of Virginia. The prologue and appendix of the book address the most burning question that people often have about Jefferson, his alleged relationship with one of his slaves, Sally Hemings.

As a stylish young aristocrat, Jefferson traveled to the first Continental Congress in Philadelphia in 1775. Jefferson was surrounded by brilliant speakers in Philadelphia, including John Adams and Ben Franklin. Throughout his life, Thomas Jefferson was a poor public speaker. Public speaking was so awkward for the tall sandy-haired young man that when he was in Virginia, he composed a list of important points for his fellow legislators to consider in drafting a state constitution. When it came time to address the assembly, Jefferson pled illness and simply sent the written list.

Jefferson's list was so successful that it was published throughout the colonies as "A Summary View of the Rights of British America." The pamphlet was met with great acclaim, and among the revolutionaries, Jefferson's reputation as a writer preceded him. The Congress gave Jefferson several assignments. He was chosen to serve, with John Adams and Ben Franklin, on a committee to draft a Declaration of Independence justifying the war. Adams was aware that he and Franklin would be called upon to debate the Declaration, so he chose the committee member with the lowest profile to draft the resolution. According to Adams, Jefferson did it in "a day or two."

After the war, Jefferson was sent to Paris as an ambassador. John Adams and Ben Franklin were also ambassadors to France at the time. Adams, just eight years older than Jefferson, adopted the younger man almost as a son. Jefferson, whose wife had recently died, stayed with the Adams family while he established a home. In France, Jefferson first revealed his gift for political agility. He also developed close relationships by letter with two protygys, James Madison and James Monroe.

Ellis next portrays Jefferson at Monticello after enduring a difficult term as George Washington's Secretary of State. Jefferson believed that the U.S. should be a republic, a group of autonomous states formed into a loose trade alliance. He frequently conflicted with Alexander Hamilton, the Secretary of Treasury, who favored a very strong centralized government. Ultimately, Jefferson ran for president against his old mentor John Adams and lost. During his sojourn at Monticello, Jefferson healed his wounds sufficiently to consider another run for president. This time he was victorious.

Jefferson's stellar first term as president is highlighted. During this time, Jefferson repaid a significant national debt. The U.S. enjoyed a prosperous economy and international harmony. Most importantly, Jefferson led the purchase of the Louisiana Territory from Napoleon, doubling the size of the U.S. overnight. Ellis skips over Jefferson's insignificant second term to focus on his waning years at Monticello, especially his renewed correspondence with his old friend and nemesis, John Adams. Providentially, both men died on the same day: July 4, 1826, exactly 50 years since the publication of the Declaration of Independence.