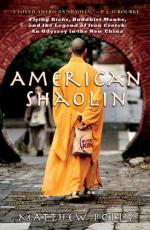 Matthew Polly
This Study Guide consists of approximately 74 pages of chapter summaries, quotes, character analysis, themes, and more - everything you need to sharpen your knowledge of American Shaolin.

American Shaolin: Flying Kicks, Buddhist Monks, and the Legend of Iron Crotch: An Odyssey in the New China Summary & Study Guide includes comprehensive information and analysis to help you understand the book. This study guide contains the following sections:

This detailed literature summary also contains Topics for Discussion on American Shaolin: Flying Kicks, Buddhist Monks, and the Legend of Iron Crotch: An Odyssey in the New China by Matthew Polly.

"American Shaolin" tells the true story of a young American man called Matt who decides to travel to China to learn kung fu at the Shaolin Temple. He wants to change a list of things that he thinks is wrong with him. When he arrives at Shaolin it is not everything he expected, but he is determined to see it through. He comes to respect Shaolin for what it is, not what he wants it to be, and learns more about Chinese culture and society while he is there. He changes, becoming braver and more confident, and gradually crosses everything off his list. By the time he returns to America he is more skilled in kung fu, and feels that he has finally become a man.

Matt makes a list of things that are wrong with him, consisting of: 1) ignorant, 2) cowardly, 3) still a boy (not a man), 4) unattractive to the opposite sex, 5) spiritually confused. He goes to college to cross off number 1, but then decides the best way to address the others is to study kung fu at Shaolin in China. Matt's parents do not approve, but Matt uses his college fund to do it anyway.

When Matt arrives in China, he has no idea where the Shaolin Temple is and has to ask until someone can direct him. He catches a train to Zheng Zhou, then a bus to Shaolin. He is surprised at how tacky and touristy the place is, but he is determined to learn kung fu and so he is not put off. He agrees to pay $1300 a month for his training, room and board while there. He settles in, and begins his first lessons. At first, training is very hard and painful for Matt, but after a while his legs become more flexible and the pain goes away. He manages to find a vendor that sells coca cola, but in other ways he misses home and begins to feel quite lonely.

As Matt displays his willingness to train and 'eat bitter' the other monks begin to accept him. He angers Deqing by questioning why a monk would be interested in money, and is then ashamed when he finds out Deqing's sad back-story. Deqing forgives him, and the two become good friends.

One day Matt has a religious experience while training, a feeling of perfect peace. He crosses 'spiritually confused' off his list. However, he is still concerned that he is a coward and could not win in a proper fight. He decides to take up Chinese kickboxing. The leaders of the Wushu Center set up a new team so Matt can learn. At first the other team members do not approve of Matt, but when he shows them how serious he is about training, they accept him. Coach Cheng, the kickboxing instructor, becomes a good friend and mentor to Matt.

Matt begins to settle in even more, and learns more about the Chinese people. He becomes better at dealing with them, and manages to renegotiate how much he is paying for training. He is also improving at kung fu, and Coach Cheng decides he will compete at the kung fu tournament in Zheng Zhou in the fall. Matt's confidence has gone up considerably, and he now begins to visit other areas and other people in China. However, he does not have much luck with women, and still experiences prejudice because he is a foreigner. When a new American student, John Lee, arrives at Shaolin, Matt is pleased to have a friend who is similar to him.

When a visiting master from a rival school challenges Shaolin, Matt steps up to defend Shaolin's honor. He wins the fight and gains even more confidence. At the tournament Matt makes it to the final but loses to the Chinese National Champion. However, he realizes that in fighting this match, he has finally conquered his fear. He can cross 'cowardly' off his list. After this, he has the confidence to face trouble on his own, protects John Lee, and finds a proper girlfriend. He crosses 'unattractive to the opposite sex' off his list.

When Matt is finally ready to leave Shaolin he realizes that he has achieved what he wanted to and become a much more confident person. Back in America, his father remarks that Matt has become a man, and he crosses this final item off his list. However, he also realizes that he will be constantly adding new things to the list, such as 'family' and 'career' and that this is actually a positive thing rather than a negative thing.

When Matt revisits China and Shaolin ten years later, a lot has changed. However, what remains the same is the dedication and passion of the monks and the kung fu students, which is what Matt admires so much.

More summaries and resources for teaching or studying American Shaolin: Flying Kicks, Buddhist Monks, and the Legend of Iron Crotch: An Odyssey in the New China.

American Shaolin: Flying Kicks, Buddhist Monks, and the Legend of Iron Crotch: An Odyssey in the New China from BookRags. (c)2022 BookRags, Inc. All rights reserved.