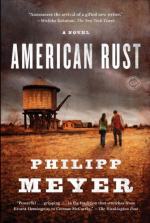 American Rust is a bleak and unsettling novel that tells the story of two young men, Isaac English and Billy Poe, and the tragedies that follow after Isaac murders a homeless man in an abandoned car factory.

Isaac English, 20, and Billy Poe, 21, are best friends who live in Buell, Pennsylvania. The town has been gutted by the closure of the steel mill. Both young men are aimless and unsure of what they want in life. Isaac steals $4,000 dollars from his invalid father and plans to escape to California, and Poe accompanies him part of the way. But before they can get far, three homeless men bully them in an abandoned car factory. One of the men, Jesus, gives Poe a knife wound and puts his hand down Poe's pants. Isaac throws a large ball bearing at the head of one of the bums, a Swede named Otto. Otto drops dead from the impact. Jesus and the other bum, Murray, run away.

Isaac and Poe believe the police will call Isaac's act murder, and not self-defense. They escape from the scene, but Poe leaves his football jacket there and Isaac leaves his pack in a nearby field. In the young men's attempt to evade arrest, a complicated set of relationships and secrets are revealed. Grace, Billy's son, is battling regret and getting older. Virgil, Billy's father, is neglectful and frequently absent. Bud Harris, a local policeman, has a sexual and romantic relationship with Grace. Because of his love for Grace, Harris hides Poe's football jacket from other authorities. Harris also has a past history with Billy Poe after Harris covered for a younger Poe when he beat another boy nearly to death. As for Isaac, he is caring for a disabled father, Henry, who was hurt in a steel mill fire. Isaac's sister, Lee, now lives in Connecticut with her husband Simon, and she returns to Buell. While in Buell, she rekindles a sexual relationship with the now-fugitive Billy Poe. Isaac, always smart and capable, resents that Lee was able to escape Buell while he never was.

Isaac takes his father's stolen money and runs east, battling the weather, hostile bums, and his own paranoia, starvation and mental disintegration. Meanwhile, the district attorney charges Billy Poe with the crime of the Swede's murder, given Poe's history of violence and the fact that Murray, the bum, came forward as a witness. Poe is sent to jail and then prison, and much of the narrative is spent examining Poe's time in prison, where death seems one wrong move away. Despite his predicament, Poe continually refuses to confess about Isaac's role in the murder.

As Isaac continues his western journey, Poe manages to anger every segment of the prison population by beating up a black man, failing to do a job for white supremacists, and beating up his cellmate, Tucker. But even on the cusp of being released back to the general prison population and a certain stabbing, Poe refuses to tell on Isaac in order to escape prison. Poe is released and indeed does get stabbed nearly to death after guards were bribed to not intervene.

At the same time, because of Harris' love for Grace, Harris intimidates and then kills Murray, the only witness who came forward, thus sparing Billy Poe a lengthy prison sentence. It's clear Harris' career is over and he will be eventually discovered for his crime. Poe ends the story in the hospital, alive but probably paralyzed. Isaac's father Henry commits suicide by swallowing pills, believing himself to be a burden to his family. Isaac returns to Buell a new and stronger man after his wilderness ordeal. He confesses his part in the Swede murder to Harris, but a wounded Harris tells Isaac to keep quiet and move away.