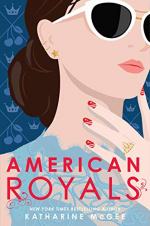 Katharine McGee
This Study Guide consists of approximately 44 pages of chapter summaries, quotes, character analysis, themes, and more - everything you need to sharpen your knowledge of American Royals.

The following version of this book was used to create this guide: McGee, Katharine. American Royals. Random House Children’s Books, 2019.

McGee’s novel begins with a prologue that reimagines American history resulting in a monarchy, commencing with George Washington. Beginning with Chapter One, the work is told in alternate third person narratives, principally from the perspectives of the young female characters of the work: Beatrice, Nina, Daphne, and Samantha. Chapters are both numbered and referenced with a character’s name, indicative of whose perspective the chapter will recount. There are 44 chapters in total, and the perspective alternates in tandem with the plot. Chapter One opens with the narrative of Beatrice Washington, a 21-year-old princess slated to take over the monarchy upon her father, the reigning King’s, death.

Beatrice is much surprised to learn that her parents are requesting that she interview potential marriage suitors at the impending Queen’s Ball. She feels the weight of her royal responsibilities and envies the freedom afforded to her younger twin siblings, Samantha and Jefferson.

In sharp contrast with Beatrice’s life, Nina Gonzalez, a freshman at the King’s College, has the life of a fairly normal young adult. However, as her mother formerly held the position of King’s chamberlain, Nina grew up with the twins and is well apprised of the life of the royals. Yet Nina prefers to keep her friendship with Sam and Jeff a secret. Nina is Sam’s closest friend, and Nina and Jeff connected romantically following graduation.

The fact that Nina and Jeff spent the night together at the twins’ graduation party is complicated by the fact that, at the time, Jeff was involved in a three-year relationship with Daphne Deighton. Daphne is a social climber whose parents are on the edge of new aristocracy. Her mother, Rebecca, is an ambitious woman who came from nothing and married into wealth and privilege. She constantly pressures her daughter to secure her position in the royal fold.

Samantha Washington feels overshadowed by her seemingly perfect older sister and acts out in an effort to gain her parents’ attention. Sam’s restlessness nature manifests itself in one mischievous act after another. She clings to her best friend, Nina, as she does not trust others and feels somewhat disconnected from Beatrice. Sam recruits Nina to accompany her to many royal events such as the Queen’s Ball. Nina is reluctant to join given her history with Jeff. Jeff broke up with Daphne shortly after the graduation party but never followed up with Nina.

At the Queen’s Ball, Beatrice is forced to spend time with wealthy, aristocratic suitors who would be worthy of a strategic alliance for the monarchy. This endeavor intimidates Beatrice, as she has no experience with relationships. Beatrice’s only true connection is with her bodyguard, Connor Markham. Faced with selecting a suitor, Beatrice realizes the depth of her love for Connor as well as the impossibility of a relationship with him. Theodore Eaton, appears to be the only viable candidate. However, unbeknownst to Beatrice, Sam has already set her sights on Teddy as the two have shared a first kiss in the cloak room.

What ensues after the ball proves to be a series of young star-crossed lovers, trying to navigate first love. Jeff regains Nina’s attention and they agree to secretly date. Connor and Beatrice share their first clandestine kiss, despite her decision to date Teddy. Sam pines for Teddy, while Daphne stews over Jeff’s apparent disinterest in her, ultimately scheming to regain her position as Jeff’s girlfriend.

Complications soon ensue as Daphne points the paparazzi in Jeff and Nina’s direction unleashing a fury of gossip and distasteful media coverage. Beatrice learns that her father has a terminal illness, explaining her parents’ desire to find her an appropriate suitor. Teddy then discloses to Sam that his family is in a dire financial situation and he has a duty to his family to acquiesce to Beatrice’s proposal. Beatrice fails to tell Connor of her engagement for fear she will lose him, and Connor proposes to her in hopes there is a way for them to stay together. Beatrice declines, bound by duty despite her broken heart.

As Daphne continues to contrive ways to sabotage Nina, it is revealed through flashbacks that she similarly plotted against her best friend Himari. Himari learned that Daphne spent the night with Ethan Beckett, Jeff’s best friend. When she threatens to tell Jeff, Daphne thwarts the plan by slipping sleeping pills in her drink. At the graduation party, Himari falls down a flight of stairs and is comatose for the entirety of the work. Daphne continually visits Himari out of remorse for her actions, yet it does not prevent her from trying to destroy Nina. Ultimately Daphne corners Nina and belittles her, whittling away at her self-esteem until Nina buckles and breaks up with Jeff. When Nina confronts Jeff with Daphne’s vitriolic attack, Jeff accuses Nina of being insecure, compounding Nina’s feelings of loss.

Plagued by her inability to resolve her feelings for Connor, Beatrice finally decides to disclose their relationship to the King and break off the engagement with Teddy. Beatrice confides in Sam, who is elated over the prospect of a potential relationship with Teddy. When Beatrice meets with the King, however, he attempts to dissuade her of this decision declaring she will regret it, as will Connor, for the rest of her life. In the midst of this heated discussion, the King collapses and is rushed to the hospital.

Daphne seeks out Jeff after the breakup, and wittingly concurs with Jeff’s opinion that Nina is insecure and jealous. She then leaves with Ethan, and the two end up in bed together yet again. When they awake, social media is abuzz with the King’s hospitalization and Daphne throws a stunned Ethan out so she can support Jefferson. Jeff accepts her support. The two of them are discovered by Nina when she too travels to the hospital to offer support. Daphne excuses herself to visit Himari and confesses her bad acts, only to have Himari squeeze her hand. Startled, Daphne ponders Himari’s lucidity.

Beatrice is convinced her request to dissolve her engagement with Teddy to be with Connor has jeopardized her father’s health. Bereft, she requests Teddy accompany her to address the American public as they congregate at the hospital in support of the King. At the close of the work, the King dies and Beatrice is crowned Her Majesty Beatrice Regina, Queen of America.

More summaries and resources for teaching or studying American Royals.