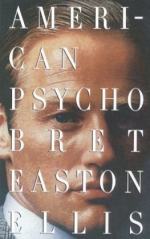 Bret Easton Ellis
This Study Guide consists of approximately 41 pages of chapter summaries, quotes, character analysis, themes, and more - everything you need to sharpen your knowledge of American Psycho.

This detailed literature summary also contains Topics for Discussion and a Free Quiz on American Psycho by Bret Easton Ellis.

American Psycho is a novel that makes a statement about modern society. Patrick Bateman is a rich kid who works on Wall Street. Bateman spends his mornings at the gym and his nights clubbing with his friends. Everyone believes Bateman is a nice guy, the shy boy next door. What his friends do not know is that Bateman is a psychopathic killer who has confessed to his crimes repeatedly. No one wants to believe that the boy next door could hurt someone, so everyone chooses to ignore Bateman's confessions. American Psycho is a satire that is both entertaining and frightening, opening reader's eyes to the consequences of apathy in society.

Patrick Bateman and his friend, Tim Price, are on their way to dinner at Evelyn's, Bateman's girlfriend, house. Price is talking non-stop, a result of too many steroids. Bateman listens quietly, putting little energy of his own into the conversation. As they approach Evelyn's house, Price teases a homeless man with some money, but in the end refuses to give it to him. Bateman finds this cruel. During dinner at Evelyn's, Price and Bateman get into a political discussion while Evelyn's artist friends watch the conversation with disinterest. After dinner, Bateman watches Evelyn and Tim flirt, wondering if the two are having an affair.

A few days later, Bateman goes to dinner with a group of friends, including Price. Price is agitated all night. When they get to a nightclub, Price buys drugs that turn out to be artificial sweetener. Price then becomes fascinated with the train tracks that run through the club. After a time, Price makes a scene and then walks down the tracks. Bateman lets him go, walking out of the club without Price. No one sees Price after that night.

Some time later, Bateman has a date with a young woman who would rather go to a concert where her ex-boyfriend is playing. Bateman hates music, so he lies to the girl about getting a table at an exclusive restaurant. Unfortunately Bateman cannot get reservations to the restaurant, causing the girl to be so disappointed she refuses to speak to him for the rest of the night. A few days later, Bateman goes into his dry cleaners to complain that they did not get blood out of his jacket as requested. As Bateman argues with them, a girl from his building comes into the dry cleaners and sees dried blood on the sheets Bateman has also brought in to be cleaned. The girl believes Bateman when he says the blood is chocolate and then pushes him into having dinner with her. Bateman brushes the girl off, promising to call.

Bateman has begun to date Courtney, a friend of Evelyn's, while attempting to keep Evelyn happy. Evelyn is boring to Bateman, always talking about things he does not care about and fantasizing about a wedding between the two of them. Bateman would rather be with Courtney. Bateman is annoyed, however, that because of her boyfriend, Courtney is not always available to him. Bateman decides to kill Courtney's boyfriend, Luis Carruthers. However, while Bateman is attempting to choke Luis, Luis tells Bateman that he is in love with him and wanted to be with him for a long time. Bateman is so shocked by this admission that he stops trying to choke Luis. Later, Luis makes a scene in a department store, attempting to make Bateman admit his feelings for him. Instead, Bateman kicks him in the face and leaves him humiliated. Eventually, Luis marries Courtney, whom Bateman has lost interest in because of her affair with another man.

Bateman becomes fixated on Paul Owen because Owen has a coveted account at work. Owen believes Bateman is a fellow worker named Marcus Halberstam. Bateman encourages this mistake by calling Evelyn by Marcus's girlfriend's name. Bateman continuously tries to get information from Owen about the coveted account, but Owen often changes the subject. Finally Bateman decides that if Owen is gone, the account will be reassigned. Bateman kills Owen and then makes it appear as though Owen has gone to London.

While out on the town one night with two friends and a couple of girls, Bateman runs into a girl he dated in college. When the girl, Bethany, asks Bateman to lunch, he is very nervous until he learns that Bethany is dating a man they both knew in college and whom Bateman believes is gay. Bateman asks Bethany up to his apartment and while she is there, Bateman tortures and kills her. At the same time, Bateman has gotten into the habit of soliciting prostitutes and killing them as well.

Bateman begins dating his secretary shortly after breaking up with Evelyn. Bateman finds that being with his secretary makes him feel calm, makes the need to kill less intense. However, Bateman does not believe he can survive a mundane life of being a husband and father. Bateman continues to date his secretary but does not commit to her. At the same time, Bateman kills a young boy at the zoo and a musician on the street. When Bateman kills the musician, he is seen by a couple of cops. Bateman leads them on a chase through the streets where he kills a taxi driver. Bateman eventually makes it to his office and calls his lawyer, making a full confession to all his crimes.

More summaries and resources for teaching or studying American Psycho.