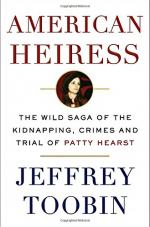 This study guide was created from the following version of this book: Toobin, Jeffery. American Heiress; The Wild Saga of the Kidnapping, Crimes and Trial of Patty Hearst; Doubleday, New York, 2016. Kindle AZW file.

Patricia Hearst was the daughter of a wealthy, powerful family. In February of 1975, she was attending the University of California and living with her fiance, Steve Weed. Patricia was almost 20 years old, bored with her life, and realizing her relationship with Steve was a mistake. One night, members of the Symbionese Liberation Army – a ragtag group of less than a dozen people – forced their way into her apartment. Steve managed to get free and ran away. The SLA members took a few shots at other people in the apartments, forced Patricia into the trunk of a waiting car, and drove away.

She was terrified during the early hours of her ordeal, especially when she learned that the SLA had claimed responsibility for a recent assassination. The SLA was a radical group of disorganized young people. They kidnapped Patricia as a means of garnering attention but did not really know what to do with her. With no ransom demands, Patricia's family could only wait. The FBI began work on rescuing her but had no real leads.

The SLA members talked about their politics including their hatred of people like Patricia's parents. It was garbled rhetoric but some points began to sink in to Patricia. She participated in the conversations and began a relationship with one of the SLA members. She taped messages to her parents several times and soon began spouting the same rhetoric heard from other SLA members. In Patricia's version of events, she was constantly fearful for her life and afraid to disobey the members of the SLA. She participated in a bank robbery, took the name “Tania” to signify her allegiance with the SLA, and declared that she would never return to her former life.

Patricia was involved in a shootout on the streets of Los Angeles that led police back to the other members of the SLA. The fact that she fired a gun on a busy street to save members of the SLA swung public opinion against her. She became a true fugitive instead of a kidnap victim. Police had a lengthy firefight with the other six SLA members and they all died.

Patricia and the remaining two SLA members hid out for awhile and eventually joined with another group that called themselves revolutionaries. They struggled constantly for money and robbed two banks. In the second, the radicals shot and killed one woman and kicked a pregnant woman who then lost her baby. By then, the group had settled into something that resembled a normal life. Police finally tracked them down and arrested several members of this new group without incident.

In jail, Patricia's family gave her full support and provided a series of lawyers. She began to transform back into the young socialite and heiress. She was sentenced to a short jail term but received a presidential commutation and later, a presidential pardon. Public opinion swayed on the issue of her state of mind during the months with the revolutionaries. Some felt she was a brainwashed victim while others thought she was a spoiled child who took a chance to leave her old life behind. Over the years, most felt she had been punished enough, regardless of her motivations. She lived as a revolutionary on the run for a year and a half but eventually resumed the life of wealth and privilege.