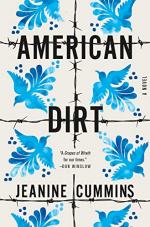 Jeanine Cummins
This Study Guide consists of approximately 55 pages of chapter summaries, quotes, character analysis, themes, and more - everything you need to sharpen your knowledge of American Dirt.

The following version of this book was used to create the guide: Cummins, Jeanine. American Dirt. Flatiron Books, 2020.

Cummins’ novel is divided into 36 chapters and an epilogue, essentially covering the aftermath of sixteen executions by the Mexican cartel. The tragedy forces the protagonist and her son to migrate to the United States. Additionally, Cummins has included an author’s not at the end of the work. This is due to the firestorm of controversy that the work has ignited.

Lydia Quixano Perez and her son Luca are the only survivors of the massacre and must escape Mexico to avoid being killed by the cartel. The work is told in the third-person narrative, but the author frequently angles the narration from a particular character’s perspective. It is through Luca’s eyes that the audience experiences the murders.

Lydia realizes she must disappear as the cartel put a hit on her husband Sebastian, and presumes they have killed his entire family as a form of retribution for an article he published. Once it is discovered that Luca and Lydia are alive, they will be hunted. Creating a plan as she goes, Lydia heads for a hotel but is quickly discovered by Javier Crespo Fuentes, the head of the reigning cartel. The two are former friends, prior to Lydia’s knowledge that Javier was La Lechuza, head of the Los Jardineros cartel. His moles are everywhere and Lydia realizes she must head north to escape.

Lydia enlists the help of her husband’s roommate, Carlos, to escape to Mexico City in hopes of taking a flight to the United States. However, she is thwarted by a lack of identification for Luca, and is forced to become a migrant. Her only possible escape lies in traveling by train. La Bestia, or the Beast, is the freight train upon which migrants ride illegally. The only way to board is by jumping, a dangerous and potentially fatal endeavor.

Fortunately, Lydia and Luca befriend two girls from Honduras, Soledad and Rebeca. Mere adolescents, the two show Lydia how to board a moving train and they quickly become a foursome. Both girls are beautiful, and thus attract unwanted attention, as well as experience a heightened risk of sexual assault or abduction. Soledad has already been repeatedly raped, a primary reason for her migration. Along the journey she confesses she is pregnant, but loses the baby.

On the journey, Lydia reflects on her friendship with Javier prior to her knowledge of his identity as el jefe of Los Jardineros. She is leery when Luca discovers a young man possessing the cartel tattoo of a sickle with blood droplets. Lorenzo appears to be dogging them and finally approaches them on La Bestia to show Lydia a selfie of her and Javier. He informs her he is trying to get out of Los Jardineros but the picture has been widely circulated with instructions to bring Lydia to Javier. Lorenzo shadows the four travelers throughout their journey, much to Lydia’s dismay. He also tells her of Javier’s daughter’s suicide.

The group travels on La Bestia by day and stays in shelter at night. In Culiacan, the train is raided by la migra. The corrupt officials round up the migrants who try to run, and take their possessions. A group of men separate Sole and Rebeca, and they are physically and sexually assaulted then returned to the group, broken. Temporarily housed in a warehouse, officials ask if any migrants are Mexican. A man lies about his nationality and is shot immediately. Lydia identifies herself as Mexican and she and Luca are allowed to leave for a price. Luca insists they pay for Sole and Rebecca’s freedom.

The four forge ahead to Nogales, meeting a young boy from Tijuana, Beto. Beto educates them on the deportees they see traveling south. Upon arrival in Nogales, they meet El Chacal, the coyote hired to transport Sole and Rebeca across the border. He reluctantly agrees to take the additional three for a price. The group is sheltered in an apartment to await their journey. Again Lorenzo appears.

Joined by other migrants, the group traverses the Sonoran Desert. The trek is arduous and anxiety-provoking as many threats loom: rattle snakes, dehydration, injury, border patrol, and even zealous vigilantes. At one point Luca develops a blister and he and Lydia are separated from the group. A violent series of thunderstorms results in a deluge of water flooding a crevasse in which they are traveling. One traveler, Ricardin, breaks his leg and must travel to Ruby Road to survive.

During a resting period, Lorenzo tries to rape Rebeca and is thwarted by El Chacal. Sole takes his gun and kills Lorenzo. Lydia accesses Lorenzo's phone, calls Javier, and tells him it is over and his informant is dead. He professes his feelings for her to no avail. Beto’s asthma becomes increasingly worse until he can no longer breath. He dies despite efforts to save him.

Sole, Rebeca, Lydia, and Luca make it safely across the border. The Epilogue describes their lives in Maryland with Sole’s cousin. It is challenging to acclimate but they are safe.

At the end of the work, Cummins’ Author’s Note addresses the controversy surrounding the work. She addresses her qualifications as a writer, as well as acknowledges that it is a heavy undertaking to write about a migrant experience having never been a migrant. She describes her research, as well as her reasons for undertaking such a daunting endeavor.

More summaries and resources for teaching or studying American Dirt.