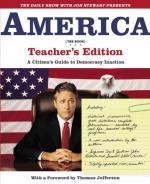 Jon Stewart
This Study Guide consists of approximately 20 pages of chapter summaries, quotes, character analysis, themes, and more - everything you need to sharpen your knowledge of America.

This detailed literature summary also contains Topics for Discussion on America: A Citizen's Guide to Democracy Inaction by Jon Stewart.

America (The Book): A Citizen's Guide to Democracy Inaction was written by Jon Stewart and a team of writers in 2004 which pokes fun at American political institutions and attitudes. The book's other two authors were Ben Karlin, the executive producer of Jon Stewart's The Daily Show and David Javerbaum, the show's head writer. It is intended to mock United States high school social studies textbooks, and as such, is composed of various satirical exercises, study guides and quick facts.

Small articles are contributed by then Daily Show affiliates Stephen Colbert, Samantha Bee and Ed Helms, and other pages have fake campaign stickers for different historical presidential candidates. The book appeared just before the 2004 election and in its first printing had an election guide that made fun of the candidates, but subsequent printings do not have the insert.

The book contains a study guide, a foreword, afterword, and so on, but it primarily comprised of nine chapters. Chapter 1, "Democracy before America," is a brief, satirical synopsis of world political history and American political history. It begins with a brief discussion of prehistoric man and Athenian democracy, moving through the Enlightenment and ending prior to the American revolution. Chapter 2, "The Founding of America," discusses various important events that led up to the American founding, such as the American Revolution, the Boston Tea Party, the Articles of Confederation, and so on. The chapter relates real events and gives some factual content, despite its comedic intent.

Chapter 3, "The President: King of Democracy," analyzes the office of the presidency, explaining how it has evolved over time, its original powers and the powers it has since acquired. It also discusses various facts about historically important presidents. Chapter 4, "Congress, Quagmire of Freedom," engages in a largely factually accurate description of the intended and actual function of Congress. It includes a discussion of the rationale for the bicameral structure of Congress and a detailed explanation of how bills are passed, replete with genuine and frank discussions of how pork-barrel legislation works and how lobbyists have inordinate influence in the legislative process.

Chapter 5, "The Judicial Branch: It Rules," covers the workings of the Judicial Branch, covering Appellate and District Courts but mostly focusing on the Supreme Court; this chapter also includes the controversial photo-shopped images of naked Supreme Court justices (current in 2004). Chapter 6, "Campaigns and Elections: America Changes the Sheets," discusses the structure of American campaigns, political parties, fundraisers, elections and so on. Chapter 7, "The Media: Democracy's Guardian Angels/The Media: Democracy's Valiant Vulgarians," explains the proper role of the media in a free and democratic society and severely criticizes its present role.

Chapter 8, "The Future of Democracy: Four Score and Seven Years from Now," reflects on possible, but comedic and improbable futures for American democratic institutions, and Chapter 9, "The Rest of the World: International House of Horrors," notes that while life may be difficult in the United States, it is far worse elsewhere and then outlines various facts about other regions of the world.

More summaries and resources for teaching or studying America: A Citizen's Guide to Democracy Inaction.