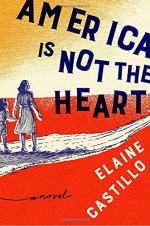 America Is Not the Heart Summary & Study Guide

Elaine Castillo
This Study Guide consists of approximately 68 pages of chapter summaries, quotes, character analysis, themes, and more - everything you need to sharpen your knowledge of America Is Not the Heart.

America Is Not the Heart Summary & Study Guide Description

America Is Not the Heart Summary & Study Guide includes comprehensive information and analysis to help you understand the book. This study guide contains the following sections:

This detailed literature summary also contains Quotes and a Free Quiz on America Is Not the Heart by Elaine Castillo.

The following version of this book was used to create this study guide: Castillo, Elaine. America Is Not the Heart. New York: Viking, 2018.

The novel opens with a Prologue that introduces a young woman named Pacita (known as “Paz”). It is told in the second-person perspective, with Paz referred to as “you,” so that the story of Paz is imposed upon the reader. She grows up in a poverty-stricken village in the Philippines with estranged parents, many siblings, and a dream of immigrating to America. She goes to university to become a nurse and while she is working at a hospital she meets a handsome, older, wealthy surgeon named Apolonio (“Pol”). Paz fulfils her goal to leave home and travels across the ocean, settling in a suburb in California with a vibrant Filipino community called Milpitas. Soon after she marries Pol and he joins her in America. Their first and only daughter is born, and they name her Geronima, after Pol’s beloved niece, who he believes is dead.

The narrative then switches to an omniscient third-person perspective that closely follows Pol’s niece, Geronima, who turns out not to have died after all. She arrives in California and moves in with Pol, Paz, and their daughter (who goes by “Roni”) in the summer of 1990. Roni declares that her older cousin will be nicknamed “Hero.” The circumstances around Hero’s move to California and her past are ambiguous, but we are told that she has sustained some sort of injury. The novel goes back to the past to describe the close relationship between a Hero and her uncle, how she went to university to become a surgeon like him, and how she was dropped off at Pol’s house by Eddie, a young man who had joined the New People’s Army (a communist guerilla force rebelling against martial law in the Philippines).

Hero becomes Roni’s full-time babysitter, picking her up from school and chaperoning her to appointments and playdates. Roni is a spunky young girl and is always hungry, restless, and regularly gets into fights at school. Paz arranges for Roni to see a faith healer for her eczema. Hero brings Roni to see a woman named Adela at the barbeque restaurant she runs with her husband. They meet a pretty young makeup artist named Rosalyn, Adela’s granddaughter, who works at the hair salon next door. They become friends and Hero and Roni develop routine of spending time at the restaurant seeing Adela, doing Roni’s homework, watching films, and eating barbeque with Rosalyn and her grandparents. They start to get to know Rosalyn’s friends and family (particularly her best friend and neighbor Jaime) and become part of the community. Hero has regular flashbacks and we learn more about her past, her involvement in the New People’s Army, and various sexual exploits with both men and women, and how she was close with the group’s “kumander,” Teresa. We learn that Hero’s thumbs were broken right at the base near the joints while she was a prisoner.

Hero is a quiet person and does not share information about her past very much. However, she starts to develop a friendship with Rosalyn and shares small details about her 10 years in the NPA, how she spent two years imprisoned, and that she had been a doctor. She spends New Year’s Eve at a party with Rosalyn and her friends and notices that Rosalyn likely has a crush on her. She goes home with a man named Peter, and pages Jaime the next morning. He picks her up and they go for Mexican breakfast. This begins a new routine of evenings out with Jaime in the city, each of them looking for casual sexual partners to spend the night with.

Paz is determined to throw an extravagant party for Roni’s eighth birthday that is far out of her price range in order to give the appearance of their family’s attainment of the American Dream. She puts all of their expenses on her credit card, working long hours as a nurse to pay off the minimum each month and to support their household and her relatives back home in the Philippines. Hero observes that as far as she knew, her uncle Pol had not practiced medicine since he immigrated here. Hero has trouble adjusting to her new life of relative comfort and simplicity in America and while she is at Roni’s birthday party she cannot help but wondering if all the people she cares about in the NPA are even still alive. Hero finds Roni being tickled Paz’s sister Carmen’s two teenage sons and is terrified that Roni is being taken advantage of by them.

After Rosalyn notices Hero go home with a girl named Vanessa, she asks if Hero will consider sleeping with her. Hero rejects her and retorts back that she should find a woman her own age (she is in her late twenties, while Hero is in her mid-thirties), but Rosalyn insists that she think about it. Meanwhile, Hero an application for an examination for foreign medical graduates amongst Pol’s papers. Hero goes to the Flores de Mayos pageant with Rosalyn for her birthday and gives in to the attraction she feels to Rosalyn, and to her annoyance and surprise, she finds that the sex is better than she expected. She thinks it will be a quick fling but soon enough she cannot even imagine a time when she was not constantly having sex with Rosalyn. The narrative changes to the second-person perspective that was utilized in the Prologue for a brief chapter that focuses on Rosalyn, and we appreciate how deeply she has fallen in love with Hero.

The rest of the narrative returns to Hero and we find that she is slowly recovering from the physical and emotional traumas from her past. Her flashbacks to her time in the NPA become less frequent and she finds new purpose in her life in California through her relationships with Roni and Rosalyn. Meanwhile, Rosalyn’s grandfather dies, and Hero and Jaime try to comfort her in her devastation. And after people find out about Rosalyn and Hero’s relationship, they begin to face discrimination and lose friends. Eventually Rosalyn decides she needs to move out of her mother’s home before she is kicked out.

Meanwhile, Pol’s application for American citizenship goes through and he decides to take Roni on a vacation to the Philippines before she goes back to school in September. But by late August, Pol and Roni fail to return. It turns out that when Pol applied for his medical license in America he found out that he would have to start from the position of first-year intern, so he decided to move back to the Philippines to practice medicine again at his rightful level, taking his daughter with him. Hero is deeply unsettled by the loss of Roni’s presence in her life, as her schedule with Roni had been anchoring her and giving her a sense of purpose. Rosalyn tries to provide her with comfort and they grow closer during this time, and Hero opens up to Rosalyn more about her past. Hero fights to bring Roni back home by contacting her family members—even her parents, who disowned her after her involvement with the NPA—and locates her uncle. She demands that they return. By December, Roni and Pol return, to Paz and Hero’s infinite relief. Soon after, Hero tells Rosalyn that she loves her, and they celebrate Jaime’s birthday. The novel then concludes with Pol, Paz, Roni, and Hero eating together for the first time in a very long time, united as a family around the traditional Filipino noodle dish pancit.

More summaries and resources for teaching or studying America Is Not the Heart.

America Is Not the Heart from BookRags. (c)2022 BookRags, Inc. All rights reserved.