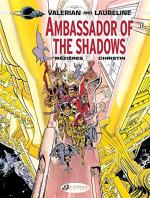 The Grumpy Transmuter is a creature from Bluxe that is able to manufacture more of any specific small item, such as pearls. Known as Grumpy, it represents Laureline's compassionate side, as seen in her concern for the creature after its reserves have been spent. It also symbolizes the power of currency because it is able to produce items that Laureline uses to buy information in her quest to find Valerian.

The fleet of spaceships is symbolic of the Ambassador's willingness to force the people of Point Central to accept a federation to govern Point Central, with Earth at the helm of this organization.

The council is a symbol of a self-governing plan that has been working for centuries. The Earth wants to change the governing plan. The races of Point Central take turns leading the council, but Earth's...

Ambassador of the Shadows (Valerian) from BookRags. (c)2022 BookRags, Inc. All rights reserved.