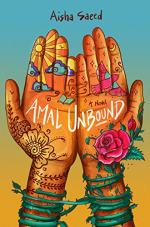 Aisha Saeed
This Study Guide consists of approximately 63 pages of chapter summaries, quotes, character analysis, themes, and more - everything you need to sharpen your knowledge of Amal Unbound.

The following version of this book was used to create the guide: Saeed, Aisha. Amal Unbound. Nancy Paulsen Books, 2018.

Amal lives in a Pakistani village called Nabay Chak. She loves school and learning and even secretly borrows books from her friend Omar’s boys’ school library because its selection is broader than that of her own girls’ school. Amal dreams of becoming a teacher. But when Amal’s mother, Mehnaz, falls into crippling post-partum depression following the birth of her fifth daughter, Amal must stay home, attending to the chores and her siblings. Seema, the second eldest daughter in Amal’s family, teaches Amal the lessons she misses in school and transports Amal’s tests and assignments to and from school. But Amal still feels trapped in her domestic position at home and longs to return to school. One day, Amal ventures to the local market alone, desperate for a break from her home and chores. As Amal begins her walk home from the market after collecting some groceries, a shiny black car collides with her. An unfamiliar man emerges from the vehicle and retrieves Amal’s fallen pomegranate from the street. When the stranger asks to keep it for his mother, Amal refuses, snatching the fruit from his hands and running home. Amal soon learns that the stranger from the market was Jawad Sahib, a man feared by everyone in Amal’s village for his power, wealth, and mercilessness. Jawad Sahib perceives Amal’s behavior in the market as an expression of utmost disrespect. He visits her home following the incident to inform Amal’s father, Malik, that Amal must work in Jawad’s home to repay her debt of ingratitude. Though Malik detests the idea Amal suffering indentured servitude, he cannot protect Amal from her fate. Malik promises to financially repay Jawad Sahib, thus securing Amal’s freedom. But because Jawad Sahib has provided Malik with loans that have not yet been repaid, and because Jawad Sahib charges Malik for each day Amal resides in the Khan mansion, Malik cannot possibly procure enough money to free his daughter.

While living at the Khan estate, Amal serves Jawad Sahib’s mother, Nasreen Baji. Amal learns that Nasreen Baji’s family lives near her own, and Amal even attended the same school as Nasreen Baji’s nieces. Though Nabila, another young servant in Jawad Sahib’s household seems determined to cause Amal misery, constantly pranking and taunting her, she adjusts to her new life. Amal quickly proves herself as a competent worker and kind friend. She even teaches one of the youngest servants, a child named Fatima, how to read. During Jawad Sahib’s absences from the Khan mansion, Amal sneaks into his office, stealing his books to read at night while Nasreen Baji sleeps. Reading soon becomes Amal’s primary solace in a world devoid of true family or freedom.

One day after shopping in Lahore, Nasreen Baji allows Amal a short visit with her family. During her stay at home, Amal hears that her neighbor and friend Fozia Auntie fears for the safety of her family because they have failed to repay a debt owed to Jawad Sahib. After returning to the Khan estate, Amal learns that Jawad Sahib’s father, Khan Sahib, has constructed a local literacy center to gain himself favor in a local political election. Because the village knows that the Khan family helped fund the literacy center, no one attends. Jawad Sahib sends Amal to the center weekly, hoping to encourage attendance amongst other villagers. At the literacy center, Amal meets a teacher descended from a family of judges named Asif. He informs Amal that, although the Khan’s contributed to the literacy center’s startup costs, its funding emerges predominantly from the Ministry of Education. He also helps Amal realize that she has already achieved her goal of becoming a teacher because she taught Fatima how to read.

Throughout her stay at the Khan estate, local police have frequently visited hoping to question Jawad Sahib. Amal realizes that the police are investigating the disappearance of a local man with ties to Jawad Sahib. While standing in the estate gardens, Amal and Nabila overhear Jawad Sahib tell Khan Sahib that he ordered his gang to murder the local man. The two girls consult Jawad Sahib’s personal servant named Bilal who reveals the exact location of the murdered man’s body. During her next visit to the literacy center, Amal discloses her knowledge of Jawad’s murder of the local man to Asif, hoping that his familial connections will guarantee Jawad Sahib’s arrest. As Jawad Sahib discusses potential brides with his mother during breakfast a week later, police arrive to arrest him for murder. With both her son and husband in custody, Nasreen Baji releases all her servants. Amal returns home, uncertain about her future but grateful for some semblance of freedom.

More summaries and resources for teaching or studying Amal Unbound.