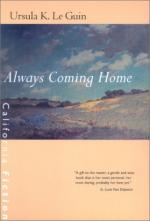 The Fiction of Scientific Progress

Always Coming Home allows Le Guin to question not only her craft, but contemporary notions of progress. Le Guin pits the Kesh, who do not use technology and are successful, against the Condors, who insist on using technology and ultimately fail. Le Guin maintains throughout this novel that technology without a connection to the universe is meaningless. The Condors fail to produce a massive killing machine because the technology-saturated culture necessary for such a machine does not exist. The Kesh succeed because they have put technology in balance with nature, making real progress.

The Fiction of Scientific Objectivity

Le Guin's novel challenges the basic concept of scientific observation. She argues that a scientist cannot write outside of her culture and, therefore, must forget claims of objectivity. We see the Kesh and the Condors not as they are, but how Pandora sees them. This...

Always Coming Home from Gale. ©2005-2006 Thomson Gale, a part of the Thomson Corporation. All rights reserved.