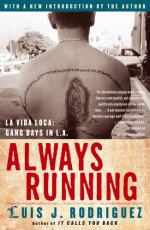 Luis J. Rodriguez
This Study Guide consists of approximately 27 pages of chapter summaries, quotes, character analysis, themes, and more - everything you need to sharpen your knowledge of Always Running.

Luis begins by remembering a day when he is nine years old and his family is on its way to Union Station. He says his mother has purchased him a new comic book, his father is refusing to return to Mexico and his mother is angry. She doesn't leave, but Luis notes that he's nothing more than a ball, bouncing wherever, and that it makes little difference.

Luis attends school but is treated with disdain as the teachers have no idea how to handle a student who isn't able to speak English. Luis, fearing he won't be understood, simply doesn't speak. As a result, he does poorly in school and soon finds himself in trouble on a regular basis. He notes that he and his friends form a "gang" for the same reasons most are formed - a combination of common interests and protection. Thee Impersonations are the first of these though he later joins The Animal Tribe, earning his nickname, "Chin," by suffering through a broken jaw.

Luis watches as boys and girls are murdered and families torn apart as a result of gang violence. He endures, clinging to hope that life can change. Through it all, he continues to follow his fellow gang members, feeling that to do otherwise would be to let them down. With that hanging over him, he helps firebomb the house of a rival gang member though he knows the gang member's family are inside.

Then he's given a chance to show his worth through a community center. With a job and a mentor, Luis comes to believe in himself. A teacher who has read some of his writing sends a sample in to a contest and Luis emerges the winner - a $250 prize representing the largest chunk of cash he's ever come by honestly. He is soon painting murals through another city-based program, and on his way to a broadcast journalism degree. Then he sees police beating a Chicano woman and intervenes, earning himself a charge of assault on a police officer. He loses time in school and contracts for art projects along with a book contract.

While living at the very edges of the gang, he refuses to partake in a cigarette laced with PCP and is rewarded by seeing others also refuse. Just as he's imagining the good he could do with these young men, other gang members approach and shoot at him - missing on purpose but making their warning perfectly clear.

Luis is aided in his escape from the neighborhood and later marries and has a child. At a family gathering, he is approached by a disfigured member of a rival gang member, bent on revenge. Luis says he would gladly give his life to ease the suffering, but urges forgiveness instead. As he says, it's time to live the life that remains.