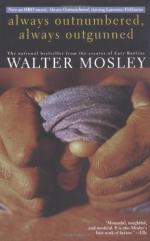 Walter Mosley
This Study Guide consists of approximately 30 pages of chapter summaries, quotes, character analysis, themes, and more - everything you need to sharpen your knowledge of Always Outnumbered, Always Outgunned.

The stories contained in Always Outnumbered, Always Outgunned are set in the Watts section of Los Angeles, California during 1995-1996 and chronicle several months in the life of Socrates Fortlow, who is the main character (protagonist) in each of the short stories. Socrates is a 58-year-old ex-convict who served 27 years in a prison in Indiana for a double murder, and who has been living in a two-room apartment in Watts for the eight years since his release. Socrates is a large African American man with huge, strong hands and a violent nature he continually – and for the most part successfully – struggles to keep in check. Socrates took a bus to Los Angeles immediately after his release from prison to start his life over in a completely new place where no one knew him. In the first few stories, Socrates is supporting himself by collecting cans and bottles for the deposit money, although later he gets a job as grocery bagger/delivery person in a supermarket.

The 14 short stories in this collection are all interconnected, and yet are written so they can be read independently of one another; each story has a beginning, middle, and an end, and its own plotline. Each of the stories deals with Socrates’ life and the struggles he faces both on the streets of his neighborhood, and within himself. Burdened with guilt over his past actions, anger at himself and the world around him, and a sense of loss related to the things his years in prison took from him or kept him from having in the first place, Socrates is a complicated and multidimensional character. The stories explore themes including guilt, responsibility, love, redemption, forgiveness, justice, poverty, racism, and friendship as they relate to both Socrates’ present and his past. They provide the reader with the portrait of a man making his way as best he can in a world where he feels he is always an underdog and can never be certain of everything.

In each of the stories, Socrates confronts a situation or dilemma in which his own unique moral compass or sense of justice is his only guide. Whether confronting a criminal threatening his community or one of his friends, dealing with one of his own inner demons, or standing up for his rights, Socrates lives by a very strict set of rules and his own code of morality. This is perhaps best illustrated in the several stories which deal directly with the crime and violence prevalent in Watts. Because he has a deep distrust of the police – and all authority – Socrates is compelled to take action on his own in these instances rather than simply ignore the problems he is confronted with. Although in each of these stories Socrates does a considerable amount of good for his friends or his community, it is often at great personal cost to himself. Although Socrates continually refers to and thinks of himself as a “bad man” his actions, though not always strictly within the law, reveal a good, compassionate heart and a highly developed sense of what is right and what is wrong.

Though Socrates is portrayed as pretty much of a loner and as a man who mostly has acquaintances rather than friends, he does form close relationships with a few other characters, and these relationships play a pivotal role in a number of these stories. Perhaps the most important of these relationships is with Darryl, a 12-year-old boy who has killed another boy – possibly accidentally – and who Socrates befriends and mentors in several of these stories. In Darryl, Socrates sees a boy who, while not precisely a younger version of himself, is on a path leading him to a future that mirrors Socrates’ past – crime, prison, and a lifetime of isolation and loneliness. By helping Darryl find his way in the world, Socrates not only discovers things about himself he didn’t know before, but also connects with a human being on a level he has not done since before going to prison.

Each of the stories in this collection also gives the reader a glimpse into some part of Socrates’ past, either through flashback scenes or dream sequences. Along with providing an insight into the events, relationships, and circumstances that have contributed to making Socrates the man he is, these scenes from the past also illustrate Socrates’ personal evolution from a wild, cold-blooded killer in his 20s to a thoughtful, moral man in his 50s. The reader is left with the feeling Socrates will continue to evolve and grow as a person.