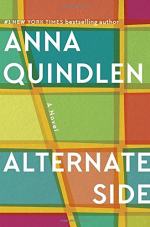 Anna Quindlen
This Study Guide consists of approximately 51 pages of chapter summaries, quotes, character analysis, themes, and more - everything you need to sharpen your knowledge of Alternate Side.

Alternate Side Summary & Study Guide includes comprehensive information and analysis to help you understand the book. This study guide contains the following sections:

This detailed literature summary also contains Quotes and a Free Quiz on Alternate Side by Anna Quindlen.

The following version of this book was used to create this study guide: Quindlen, Anna. Alternate Side. New York: Random House, 2018.

The novel opens on Charlie Nolan, an investment banker, excitedly showing his wife Nora the parking space he has just procured in the lot in their exclusive Upper West Side Manhattan neighborhood. Nora feigns interest and reflects on her neighbors, all affluent white professionals, and her mild dissatisfaction with her life now that her children are preparing to graduate college and no longer need her. Nora is also displeased with her job managing a jewelry museum, as it is a position for which she was recruited and for which she has no particular interest. She feels the museum is somewhat ostentatious.

One of Nora's neighbors, George Smythe, complains about the neighborhood handyman, Ricky, parking his van in the parking lot. Nora is fond of Ricky, and recalls once bringing a humidifier to him when his son was ill. She had been surprised by the difference in his appearance and relaxed demeanor around his own South Bronx neighborhood compared to the deference he displays at work.

Nora wakes one morning to a terrible crashing sound and runs out of the house to the parking lot, where she finds Charlie and another neighbor, Jack Fisk, standing over Ricky with a golf club in his hand. Ricky is on the ground, rolling around in pain and bleeding from the leg. According to Charlie and Jack, Ricky's van was blocking the exit to the parking lot, and Jack angrily began hitting the van with the club. Ricky came up behind him begging him to stop, and Jack hit him by accident. Based on the extent of Ricky's injuries, this seems very unlikely.

The incident attracts attention from journalists who view it as a symbol of class and racial conflict, featuring as it does a wealthy white professional assaulting a blue collar person of color. The neighborhood is plunged into turmoil as its residents choose sides. Nora's friend and neighbor Alma Fenstermacher invites Jack's wife to her holiday party, but not Jack. Charlie stands by Jack's version of events, and it causes tension between himself and Nora. This tension is exacerbated by the fact that Charlie is angry about his lack of success at work and wishes to move away from New York City, something Nora would never agree to. To make matters worse, Charlie's boss, Bob Harris, calls Nora and asks her to head up his new charitable foundation focused on improving educational opportunities for low-income children, causing Charlie to become jealous of her success. Nora visits Ricky in the hospital and learns that he had 20 stitches and pins put into his knee. Charlie rages at Nora for visiting, as he believes this implies guilt and Ricky is suing Jack Fisk. Nora responds that Jack is guilty and she will never believe otherwise.

Nora receives a phone call from her old college boyfriend, James Mortimer, who asks her to speak to a journalist friend of his about the assault. Nora reflects on her breakup with James, who told her he was gay after they had been dating for two years. She met and married Charlie shortly thereafter, as he seemed like a safe option, someone who would not hurt her. Without Ricky around to attend to daily maintenance tasks, the neighborhood develops a rat infestation. Nora calls her boss at the jewelry museum, Bebe Pearl, to inform her that a gemologist visited the museum and pronounced one of their diamond pieces a fake. Bebe responds that she knows it is a fake, as she borrowed the real one so that she could wear it. Nora, who values authenticity above all else, is infuriated that Bebe is passing off a faux diamond as real, and quits her job.

Shortly after Nora quits, Jack Fisk dies of a heart attack. After Jack's memorial service, Charlie tells Nora that he is worried he will end up just like Jack someday, and she assures him this will not happen. He tells her he is deeply unhappy. She feels the same way, and they decide to divorce. They sell their house in the neighborhood and move to separate apartments on separate sides of the city, but they remain amicable. Nora takes the job working at Bob Harris' educational foundation, which she finds much more fulfilling than her old position at the jewelry museum. One day, while visiting a school in the Bronx, she walks around the neighborhood and inquires about Ricky. She learns that he received a settlement of several hundred thousand dollars and moved his family to the Dominican Republic to open a restaurant. At the end of the novel, Nora reflects on her history in New York City and the diversity and layers of experience that contribute to the city's appeal. She is anxious about all of the recent changes in her life, but she knows that all of the upheaval has been for the best.

More summaries and resources for teaching or studying Alternate Side.

Alternate Side from BookRags. (c)2022 BookRags, Inc. All rights reserved.