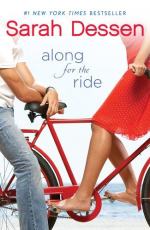 Along for the Ride Setting & Symbolism

Sarah Dessen
This Study Guide consists of approximately 32 pages of chapter summaries, quotes, character analysis, themes, and more - everything you need to sharpen your knowledge of Along for the Ride.

Istanbul is the largest city in Turkey. At one time, Istanbul was known as Constantinople.

Cape Cod is a cape located in eastern Massachusetts.

Mensa is an international organization for individuals with especially high IQs.

The Taj Mahal is a mausoleum in Agra, India. Completed around 1653, the Taj Mahal was built by the emperor Shah Jahan to memorialize his third wife, Mumtaz Mahal.

Washington, D.C., is the capital of the United States of America.

Harvard University is locate in Cambridge, Massachusetts. Founded in 1636, Harvard is the oldest institution of higher learning in the...

More summaries and resources for teaching or studying Along for the Ride.

Along for the Ride from BookRags. (c)2022 BookRags, Inc. All rights reserved.