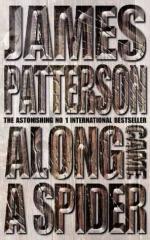 James Patterson
This Study Guide consists of approximately 44 pages of chapter summaries, quotes, character analysis, themes, and more - everything you need to sharpen your knowledge of Along Came a Spider.

Along Came a Spider Summary & Study Guide includes comprehensive information and analysis to help you understand the book. This study guide contains the following sections:

This detailed literature summary also contains Topics for Discussion and a Free Quiz on Along Came a Spider by James Patterson.

Along Came a Spider is a novel centered on Washington D.C. police detective Alex Cross. Cross and his partner are investigating a group of murders in the poor section of the capitol when they are suddenly pulled away to investigate a high profile kidnapping. Despite his anger at his boss's priorities, Cross finds himself drawn into the kidnapping plot, crossing boundaries that find him accusing his lover of murder. Along Came a Spider is a novel of mystery, romance, and social responsibility that is as thought provoking as it is entertaining.

Alex Cross and his partner, Sampson, are investigating the brutal murder of a prostitute and her two children, the second in a series of murders in the poorer section of Washington, D.C, In the midst of this investigation, they are pulled away to investigate the kidnapping of the secretary of the treasury's son and the daughter of a famous actress. Cross resents the shift in priorities that express to him a reluctance to solve the murders of poor, black families. However, as a father, he finds himself drawn into the investigation due to his empathy for the parents of the missing children.

With a team of investigators that includes members of the FBI as well as the Secret Service, Cross travels to Florida to follow a ransom demand shortly after the secretary's son is found dead. Here, in the midst of the investigation, Cross finds himself being romantically drawn to Jezzie Flanagan, the Secret Service supervisor whose agents were in charge of security for the secretary's son. After spending an evening getting to know Ms. Flanagan, Cross finds himself targeted by the kidnappers when he is picked to be the delivery man for the ransom. Cross goes to the designated drop point where he is taken at gun point aboard a plane. Cross and the ransom man fly from Florida to South Carolina, where the ransom money disappears after a brief struggle between Cross, the ransom man, and an unseen accomplice. Cross is immediately blamed in the press for the failure to rescue Maggie Rose, the surviving child.

Cross is taken off the case but continues to investigate on his own time, obsessed by the fact that he was chosen to deliver the ransom. Through his investigation, Cross discovers a connection between the kidnapper and the killer of the black families he was originally assigned to investigate. This information puts Cross back on the case. Shortly afterward, Cross receives more information that leads to the kidnapper's identification. A team travels to the kidnapper's home to make an arrest, but the man flees as they approach. A few days later, the kidnapper attempts to take the customers of a McDonald's hostage, but is taken down by Cross and the investigative team.

Since Cross is also a clinical psychologist, he arranges to meet with the kidnapper, Gary Murphy. Murphy appears to be a mild mannered man who could not possibly have been the cold blooded criminal who perpetrated the crimes that he is accused of. The idea of multiple personalities begins to surface among the professionals dealing with Murphy, but Cross is not convinced. Throughout the trial, Murphy maintains his innocence, claiming insanity. Murphy's lawyer calls Cross as a defense witness to hypnotize Murphy in an attempt to prove the theory of multiple personalities. The attempt fails to convince the jury and Murphy is found guilty.

During the trial, knowledge of Cross's affair with Jezzie becomes public, ending her career. Jezzie disappears for a short time, leaving Cross to continue his investigation unofficially. Cross still hopes to find the missing girl. Again Cross comes across some new information that spurs him into approaching the FBI. Cross learns that the Secret Service agents charged with the secretary's safety have been under investigation since the kidnappings. It is suspected they falsified their logs and might have had something to do with the kidnappings themselves. It is also revealed that Jezzie may have been involved. Cross takes it upon himself to find out the truth and sets Jezzie up on what she thinks is a romantic getaway. Jezzie admits that she and the other two agents stole the girl after she was kidnapped and took the ransom.

Cross has Jezzie arrested and shortly afterward retrieves the girl from where Jezzie and her partners had hidden her. However, Murphy has escaped from prison and makes an attempt on Cross's life as well as the lives of his family. Cross and his partner track Murphy down and stop him, sending him back to prison. Jezzie and her partners are convicted of kidnapping as well as felony murder and are executed.

Along Came a Spider from BookRags. (c)2021 BookRags, Inc. All rights reserved.