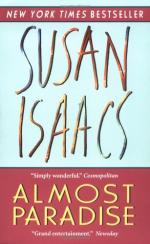 Susan Isaacs
This Study Guide consists of approximately 35 pages of chapter summaries, quotes, character analysis, themes, and more - everything you need to sharpen your knowledge of Almost Paradise.

Almost Paradise is a novel by writer Susan Isaacs. Almost Paradise is the story of Nicholas and Jane Cobleigh, a couple who once loved each other very much despite their different backgrounds and difficult upbringings. However, Nicholas's career as a Hollywood superstar and Jane's emersion from six years of agoraphobia causes so much tension in their marriage that they eventually fall apart, finding other lovers. After a separation of more than a year, Jane realizes that the only thing she wants is to spend the rest of her life with Nicholas. Jane goes to London to convince Nicholas to come back to her, but an accident separates them once again. Almost Paradise is a novel of family, of the impact the past can have on the present, and of how short life can truly be.

Unbeknownst to Jane Cobleigh, her mother was the illegitimate daughter of a fourteen year old Jewish girl. Jane's mother, Sally, left home in her early teens and tried to become an actress in Vaudeville. When this failed to make Sally famous, she joined a burlesque show. Then, at thirty-three, Sally became aware that she could not do this for the rest of her life. By chance, Sally met a young banker who was fascinated with her beauty. In just a few weeks, Sally convinced the man to marry her. Unfortunately, just a few years after Jane's birth, Sally died when she had an allergic reaction to a wasp sting. Shortly afterward, Jane's father remarried a cruel woman. Jane became subject to almost daily spankings, performed by her father but brought on by her stepmother. Then, when she was seventeen, Jane's father began visiting her bed at night.

Nicholas Cobleigh's family has a rich and deeply ingrained history in New York. Nicholas' ancestors, the Tuttles, have been important members of New York society since the time of the Revolution. Nicholas' grandparents had a love that lasted for many decades. However, Nicholas's father, an ambitious lawyer, married his mother as much for her name and her money than for love. The marriage became rocky soon after World War II when Nicholas's father wanted to join the CIA and his wife's father shut down the opportunity. Nicholas' father began to cheat openly on his wife, refusing to respect the vows they made to one another.

In Nicholas' senior year at Brown, he is asked to take a part in the play because he is capable of making a long jump from a balcony to the stage. When Nicholas realizes he will actually have to read lines, not just jump, he is unsure about the role, but Jane takes him under her wing and teaches him how to channel the character. Nicholas enjoys the role so much, that he takes another and another. Soon Nicholas and Jane are great friends, speaking at least once a day. Jane is deeply in love with Nicholas, but Nicholas has a girlfriend and sees Jane only as a friend. That is, until the final days of school when he realizes he will never see her again. Instead, Nicholas asks Jane to marry him and decides to try to make a go of it as an actor.

The first few years of marriage are difficult for Jane and Nicholas because Nicholas's family has cut him off and they must live off of the money he makes driving a taxi. About the time their first child is born Nicholas begins making a living as an actor. Soon after, he moves into movies and quickly becomes a star. About the same time, Jane begins having panic attacks that cause her to become a prisoner in their Connecticut home. Jane's self-imprisonment lasts for six years. Eventually Jane finds a phobia clinic that helps her escape her phobia. At the request of the psychiatrist who runs the clinic, Jane becomes a spokeswoman for phobias. The publicity drives Nicholas wild, causing a great deal of tension in their marriage.

After more than a year of bickering and unhappiness, both Jane and Nicholas turn to others for what they are not getting from one another. After a year, Nicholas tells Jane that he is leaving her for his twenty-two year old lover. Jane is devastated, but accepts some of the guilt because of her own lover. Then, after a year, Jane realizes that all she really wants is Nicholas back. Jane's brother talks her into flying to London where Nicholas is filming a movie and to confront him in person. However, when Jane arrives at the studio, she is hit by a car and suffers a massive head trauma. Jane dies a few days later.

More summaries and resources for teaching or studying Almost Paradise.