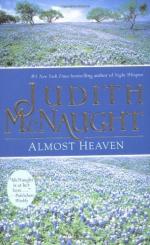 Elizabeth sells all the jewels Ian gave her in order to finance Robert's escape to the colonies in America.

Ian and Elizabeth meet for the first time in a garden. Later, Ian recreates the garden for their wedding reception.

Ian and Elizabeth meet and spend an afternoon alone together in a cottage shortly after they meet.

The day Elizabeth is caught in the greenhouse with Ian, she and Ian both received notes. Ian believed his to be from Elizabeth. It turns out Valerie orchestrated the rouse in order to steal Elizabeth's betrothed.

A dowry is the property and money a woman brings into a marriage.

In Elizabeth and Ian's time it was customary for marriage contracts to be written before a wedding to be sure both parties got all they deserved through the marriage. Ian and Elizabeth's marriage contract is unique...