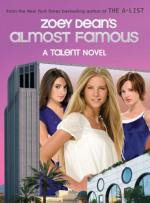 Almost Famous, by Zoey Dean, is a novel aimed at young teenage girls. It features four privileged and wealthy girls who are entering 8th grade with a goal of remaining their Bel-Air,California middle school's most popular group. However, they soon learn that the things that they do can come back to haunt them and that their clever attempts at revenge can backfire, leaving them humiliated and ostracisized by their fellow students.

On the night before starting their 8th grade year at Bel-Air Middle School, Mac, Coco, Becks, and Emily gather for their annual slumber party. Mac, Coco, and Becks are the daughters of wealthy, well-known Hollywood personalities while Emily is an aspiring actress who has come from Iowa to live with Mac's family while she pursues her dream of stardom. The girls spend time planning Mac's upcoming campaign for social chair of their class, and they have fun pulling pranks on her rival for the position, Ruby Goldman, during a video chat.

School begins as they had expected, with Coco chosen as captain of the dance team; Mac's campaign going well; Becks getting a date with her crush; and Emily catching the eye of an important film producer. However, things suddenly and unexpectedly begin to unravel. Coco learns that she has been replaced as dance captain, Austin cancels his date with Becks, the producer begins giving Emily the cold shoulder, and Ruby is elected social chair over Mac. They are perplexed until they see a video Ruby has put on the Bel-Air intranet. After their prank video chat, Mac forgot to shut down her computer and Ruby recorded the four girls making fun of their fellow classmates and revealing embarrassing details about themselves, and now all their classmates have seen the video and begun to shun them.

The girls, who call themselves the Inner Circle, are dismayed, but soon Mac hatches a plan to regain their reputation and power. She signs on as Ruby's assistant and the other girls attach themselves to Ruby's friends with a goal of using information they gain to embarrass the other girls at ExtravaBAMSa, their school's most important annual fundraising event. However, plans go awry when Ruby's crowd learns of the Inner Circle's scheming and turns the tables on each girl, leaving them more humilated than ever.

In the end, Mac assumes her usual leadership role and takes her friends in a different direction. Rather than continuing to try to regain their reputations at school, they begin to focus on their dream careers and their plans of becoming famous and dominating Hollywood.