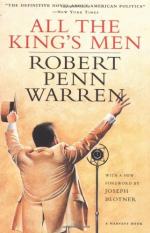 Robert Penn Warren
This Study Guide consists of approximately 21 pages of chapter summaries, quotes, character analysis, themes, and more - everything you need to sharpen your knowledge of All the King's Men.

All the King's Men Summary & Study Guide includes comprehensive information and analysis to help you understand the book. This study guide contains the following sections:

This detailed literature summary also contains Topics for Discussion on All the King's Men by Robert Penn Warren.

The story is about Jack Burden, the right-hand man to the corrupt politician, Governor Willie Stark. As Willie’s power and corruption grow larger, Jack’s conscience becomes more eroded. He alienates his family and friends by working for Willie, but he resents himself for staying on Willie’s payroll. Jack spends the novel narrating how he became Willie’s lackey while unknowingly uncovering family secrets.

Jack Burden, Willie Stark, and Willie’s political associates are on their way to Mason City for a press opportunity. It was Willie’s second term as governor in the summer of 1936, and he was trying to get more publicity for another reelection. Willie tells Jack, his personal aide, to look into the history of Judge Irwin. The Judge had publicly defied Willie, so Willie wanted to find out some secret in order to blackmail the judge in revenge. Because Jack was a former newspaper reporter and research historian, Willie used him to do his dirty work.

Back when Willie was just the Mason County treasurer in 1922, Jack was working at a newspaper. He was sent to cover a scandal surrounding Willie; he had tried to stay away from corrupt politicians, but the politicians had framed him anyway. When a schoolhouse collapsed and killed a group of children, the public realized Willie was innocent. He won the support of the people and the 1930 race for governor. Jack, meanwhile, had entered what he called a “Great Sleep.” He only awoke after Willie hired him.

Willie resisted the temptations of political power at first. It took three years before Willie succumbed to corruption. A member of his cabinet was caught in a scandal. Rather than firing him, Willie protected his associate. However, the rest of the state government officials wanted Willie gone after he proposed his wealth-sharing programs, and the cover-up was the last straw. However, Willie had Jack find incriminating evidence against each of his accusers. This is also when Willie started his affair with another woman after he and his wife had gotten a separation. Now that Jack had given Willie all the ammunition Willie needed to stay in power, Willie kept Jack on his permanent payroll. Jack was able to find out that Judge Irwin, formerly the state attorney general, was guilty of taking a bribe. He also found out his best friend’s father had covered up the bribe.

Since Jack had found out information on Judge Irwin, Willie felt comfortable moving forward with his plans for a public hospital that would take care of its patients for free. Willie asked Adam Stanton, one of Jack’s two best friends, to run the hospital. Adam wanted nothing to do with Willie or the hospital. However, it was his father who covered up for Judge Irwin years ago. Willie disclosed this information, and Adam was blackmailed into working for Willie. Jack then finds out Anne Stanton, Adam’s sister, was the woman having an affair with Willie.

Jack is distraught by the news of Anne and Willie’s affair, so he runs away to the West Coast in order to clear his mind. Anne was his first love, and they had a serious relationship back in college. Anne, though, discovered Jack was lazy and cynical. She left him, and Jack soon dropped out of graduate school and began working for a newspaper. When Jack returns to the South, though, he is surprised to find things have taken a negative turn for Willie and his office.

Willie’s son, a college boy, is accused of fathering a child out of wedlock. Willie’s opponent in the election is using the news as a way of disrupting Willie’s campaign. Willie then used the information on Judge Irwin to make the opponent leave the issue alone. Jack goes to visit Judge Irwin, his childhood father figure. Judge Irwin, refusing to be blackmailed, kills himself. It was only after the judge's death that Jack’s mother let him know that Judge Irwin was his real father.

Because the threat to Judge Irwin didn’t stop his opponent from dropping the issue about the child, Willie gives the hospital contract to a major supporter of his opponent. However, Willie’s son goes into a coma after a serious football injury. Willie takes back the contract, angering his lieutenant governor, Tiny Duffy. Tiny finds Adam and tells him his sister was the woman having an affair with Willie. Furious, Adam assassinates Willie and is subsequently killed by Willie’s guards.

The person who told Tiny about Willie’s affair was his secretary and longtime mistress. She felt so guilty about Willie’s death, though, that she checked into a mental institution. Willie’s wife adopted her grandson soon after her own son died. At the end of the story, Jack marries Anne. He has stepped away from politics, and he is completing his book about Cass Mastern, Jack’s Civil War-era ancestor. He had previously tried to write a thesis based on Mastern’s diary, but Jack lacked the focus and drive to finish.

More summaries and resources for teaching or studying All the King's Men.

All the King's Men from BookRags. (c)2022 BookRags, Inc. All rights reserved.