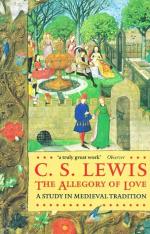 Since the publication of Apology for Want in 1997, the vivid and distinctive poetry of Mary Jo Bang has been praised by critics and readers alike. Her work is characterized by a light rhythm and a playful tone that draw the reader into her unique world of images and sounds. Bang is also recognized, however, as a subtle, intellectual, and crafty poet who addresses ambitious philosophical themes and maintains careful control over the implications of her varied language.

Allegory, originally published in the Paris Review but included in the 2004 collection The Eye like a Strange Balloon, is a superb example of Bang's balance between playful verse and profound themes. Like the other poems in Bang's collection, it is written in the tradition of ekphrasis, in which a poem is highly visual or makes close reference to a work of visual art. Interacting with Philip Guston's 1975 painting of the same name, Allegory brings Guston's imagery to life in a narrative structure and develops a unique reading of the painting's significance. The poem comments on the position of the artist in society as well as other abstract themes, such as mythology, fate, and identity. Playing with quirky language that climaxes at a point of bleak despair, Bang delights readers at the same time as she provokes them to question how artists interact with reality and how humankind approaches death and destruction.