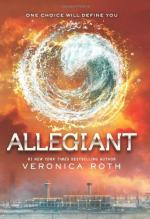 Tris is placed under the truth serum, which she manages to fight off, initially. Evelyn interrogates her while she's under the influence of the serum, but Tobias is there in Evelyn's shadows watching the procedure. He can't meet her eyes, even though Tris wants him to so that it will give her courage. Tris lies and tells Evelyn that she thought that she was acting under Evelyn's orders and that Marcus was carrying Evelyn's orders. When Evelyn asks why she didn't become a soldier like the others, Tris lies, again, and offers a partial truth: since shooting Will, holding a gun is difficult and it impairs her ability.

Evelyn is cruel and at one point leans down to whisper in Tris's ear that Tobais doesn't care for her and belongs to the new world order. Tris knows that Tobias belongs to himself...