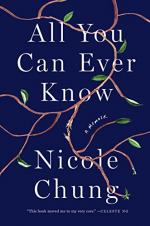 Related Topics
A Map Is Only One Story

All You Can Ever Know Summary & Study Guide

Nicole Chung
This Study Guide consists of approximately 47 pages of chapter summaries, quotes, character analysis, themes, and more - everything you need to sharpen your knowledge of All You Can Ever Know.

All You Can Ever Know Summary & Study Guide Description

All You Can Ever Know Summary & Study Guide includes comprehensive information and analysis to help you understand the book. This study guide contains the following sections:

This detailed literature summary also contains Topics for Discussion on All You Can Ever Know by Nicole Chung.

The following version of this book was used to create the guide: Chung, Nicole. All You Can Ever Know. Catapult, 2018.

All You Can Ever Know is an adoption memoir documenting Nicole Chung’s journey in understanding her roots. It begins with a younger Chung asking her mother difficult questions about her own adoption, to which she receives simple and conservative responses. Chung was born prematurely to a Korean-American family in Seattle, and was adopted at two months old by a Catholic white family. Although the novel follows a chronological timeline, the reader gets to intermittently experience an older and wiser Chung’s commentary on her past. Soon after graduating college, Chung is confronted by a couple considering adoption. She thoughtfully evaluates the complexity behind her own adoption, and the identity crisis and racism she frequently experienced in childhood.

Chung’s adoptive parents were introduced to readers as eager, loving and highly religious. They showered their new daughter with affection, but purposefully withheld information regarding her birth parents, worried that the birth parents would change their mind and attempt to “steal” their daughter away. When asked questions regarding her adoption, Chung’s parents responded by crediting their fateful meeting to “God’s will” and responded to deeply complicated race issues with a mindset of “color-blindness”. (20) When Chung experiences racial slurs in school, she increasingly feels alone and misunderstood, soon realizing that her parents were incapable of fully grasping her unique experiences as an Asian-American growing up in an all-white community. As she grows older, Chung becomes progressively frustrated with the lack of transparency in her family regarding her adoption and becomes particularly curious about the circumstances leading up to her adoption and how her birth parents truly felt about her. Although she is deeply grateful for her adoptive parents’ love, she cannot help but think about whether her birth parents had truly loved her, and what kind of people they were.

Although the novel is primarily told from Chung’s perspective, it occasionally transitions to Cindy’s point of view. Cindy is Chung’s biological sister, although Chung does not know about Cindy’s existence until she is pregnant with her first child. Cindy grows up with Chung’s biological parents, along with her half-sister, Jessica, who is ten years her senior. In the chapters documenting Cindy’s childhood, she is frequently abused by her mother and felt similarly alone in her experiences as an Asian-American growing up in a predominantly white community. Cindy was not shown much affection as a child because her parents were constantly working. When her mother becomes pregnant with her younger sister, she returns home without the baby, informing Cindy her younger sister had died during childbirth. In this way, Jessica and Cindy grew up completely unaware of Chung’s existence.

Chung marries her college boyfriend Dan, and they begin a comfortable life together. She soon becomes pregnant with Abigail, and realizes that her daughter will grow up without knowledge of her Korean heritage if she does not seek out and reconcile with her birth family. With this in mind, Chung sets out to contact her birth mother. She receives a response from her adoptive sister, Jessica, briefly informing her of their family history and Cindy’s existence. Chung begins regular e-mail correspondence with Cindy, learning the reality behind her birth mother’s abusive nature and difficulties plaguing her parents’ marriage before their eventual divorce. Cindy and Chung become close, establishing a relationship founded on openness and trust. Cindy suffers a miscarriage the day before meeting Chung for the first time, but is determined to visit her long-lost sister in person. The sisters spend quality time together, vowing to support each other as real sisters.

Following Cindy’s return to her own home, Chung decides to reach out to her birth father, with whom she begins a conversational and surface-level relationship. Her father is deeply apologetic for her adoption, again attributing her adoption to his ex-wife’s unstable mental condition. Although Chung remains curious about her birth mother, her loyalty to Cindy causes her to refrain from answering her mother’s many calls seeking reconciliation. A year after Cindy’s first visit to Chung, both sisters become pregnant again, and Chung and her husband Dan plan to visit Cindy.

Chung flies to Oregon to visit Cindy and she meets her biological father and step-mother for the first time over dinner. Chung learns that her father is a scholar deeply invested in writing, soon learns that her own passion for academia and writing is shared by both her father and Cindy. Despite her father’s usual private demeanor, he attempts to become more communicative with his two daughters, explaining the circumstances leading up to the adoption and why he had kept the secret of Chung’s existence for so long. Although Chung and her father never establish a particularly strong relationship, she is grateful to have met him and established a relationship with him to the extent that they had.

The novel wraps up with Chung’s older daughter Abigail, asking Chung the same difficult questions about adoption as she had asked her own mother in the beginning of the novel. Chung learns Korean to help her own daughters gain confidence in their Korean identity and heritage. Cindy and Chung remain closer than ever and learn to navigate the complexity of their family dynamic to raise their children together. Although Chung is grateful to have gotten to know her birth father, she ends the novel with a reflection on her gratefulness to her adoptive parents, the people who took her in when no one else did.

More summaries and resources for teaching or studying All You Can Ever Know.

All You Can Ever Know from BookRags. (c)2022 BookRags, Inc. All rights reserved.