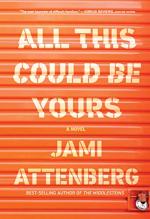 Related Topics
The Middlesteins
Saint Mazie
All Grown Up

All This Could Be Yours Summary & Study Guide

Jami Attenberg
This Study Guide consists of approximately 37 pages of chapter summaries, quotes, character analysis, themes, and more - everything you need to sharpen your knowledge of All This Could Be Yours.

All This Could Be Yours Summary & Study Guide Description

All This Could Be Yours Summary & Study Guide includes comprehensive information and analysis to help you understand the book. This study guide contains the following sections:

This detailed literature summary also contains Quotes and a Free Quiz on All This Could Be Yours by Jami Attenberg.

The following version of this book was used to create this study guide: Attenberg, Jami. All This Could Be Yours. New York. Houghton Mifflin Harcourt Publishing Company, 2019.

The novel opens in the present day in an apartment in New Orleans. The residents are Victor, who is in his seventies, and his slightly younger wife Barbra. Victor is mean and angry, and Barbra is generally impassive. Victor suddenly suffers a heart attack and goes into a coma. Victor is brought to the hospital, and the doctors predict that he will die fairly soon. Victor and Barbra’s adult daughter, Alex, comes to New Orleans to see her comatose father. Alex is divorced from her philandering husband, Bobby. Alex’s daughter, Sadie, is visiting Bobby, and Sadie is unsure how to act around her fairly reprehensible father.

Victor and Barbra’s other child, Gary, originally plans on going to New Orleans, but he changes his mind. As the novel progresses, it becomes evident that Victor was a terrible person. He frequently abused his wife and children, both emotionally and physically. Also, although he was a successful businessperson, he often utilized illegal business practices. Barbra urges Alex to express love and forgiveness to Victor before he dies. Alex verbalizes feelings of love and forgiveness to the comatose Victor, but she does not really mean what she says, and these verbalizations do not make her feel any better.

Although Gary does not come to New Orleans (because he understandably hates his father) Gary’s wife Twyla does visit the comatose Victor in the hospital. Twyla is originally from Alabama. She went to Los Angeles to be an actress. However, after she met and married Gary, she gave up that pursuit to raise their daughter, Avery. Twyla has a slight nervous breakdown in New Orleans. At first, it appears that this breakdown is simply due to the fact that Victor’s imminent death reminds Twyla of her parents’ deaths. However, the narrative eventually reveals that Twyla and Victor were secretly having an affair.

Alex is intensely curious why Barbra stayed with Victor for all those years, when Victor was so horrible and abusive. The narration also reveals that Victor was sued by 11 women for sexual harassment, and yet Barbra still remained with Victor. The narrative does not give a clear answer for why Barbra married Victor and remained loyal to him. However, it appears that Barbra’s dysfunctional relationship with her own father may have caused her to find Victor’s domineering nature attractive. After Barbra married Victor, she continued to feel loyal to him, despite the fact that Victor was horrible and that Barbra was never really happy in the abusive marriage.

After Victor dies, the other characters (except Twyla) feel a sense of relief. The characters generally do not speak to each other anymore. Barbra—who knew about Victor and Twyla’s affair—reveals the affair to the other characters. Gary and Twyla separate, and Alex goes back to her own life. The novel then ends with a focus on Sadie and Avery, who remain friends over the years despite the tensions between their parents. When Barbra dies, she leaves all of her money and possessions to Sadie. Sadie decides to split the inheritance with Avery.

More summaries and resources for teaching or studying All This Could Be Yours.

All This Could Be Yours from BookRags. (c)2022 BookRags, Inc. All rights reserved.