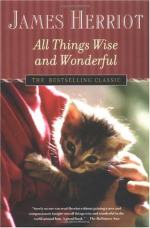 James Herriot
This Study Guide consists of approximately 39 pages of chapter summaries, quotes, character analysis, themes, and more - everything you need to sharpen your knowledge of All Things Wise and Wonderful.

All Things Wise and Wonderful Summary & Study Guide includes comprehensive information and analysis to help you understand the book. This study guide contains the following sections:

This detailed literature summary also contains Topics for Discussion and a Free Quiz on All Things Wise and Wonderful by James Herriot.

All Things Wise and Wonderful by James Herriot is the third volume of the memoirs of a small country veterinarian in the Dales of Yorkshire, England. Herriot has enlisted in the Royal Air Force, RAF, and the book begins with his basic training experiences. Herriot initially believes that he has kept himself in very good physical shape with his running about the countryside tending to the animals of the farmers in the area. However, his recent marriage to wife, Helen, enjoying her home cooking, and peaceful times together has rendered him less than perfectly fit and his suffering is intense. Every event in the RAF reminds Herriot of something back home in Darrowby.

Each chapter is a short story of his life either in the RAF military, or a memory of his life as a country vet. Most chapters begin with a scene of his current experiences in the RAF, then moving quickly to the more eloquent and whimsical stories of the people and the animals of the Dales of Darrowby. Herriot shows remarkable passion and compassion for the animals in his care and for the people who own them. His storytelling abilities bring the rich dialect of the Yorkshire farmer into one's living room as he relates the scores of stories. His characters, both human and animal, live on in memory long after the stories have been read.

With this third volume numerous favorite characters reappear, specifically his friend, employer, mentor, Siegfried Farnon with his desire to stay abreast of the advances of science in veterinarian medicine. Tristan Farnon, Siegfried's younger brother, returns with new and crazy experiences that deal with his desire to do as little work as possible and live as much as possible. The story of Tristan's stint as the locum tenens housekeeper/cook has him preparing all the meals for Siegfried and James while their housekeeper, Mrs. Hall visits her ailing sister. Every meal is sausage and mash. Initially Siegfried enjoys Tristan's culinary efforts, but after endless, tortuous meals of sausage and mash Siegfried claims to understand how the poisoned calves he is currently tending feel.

Herriot's ability to bring to life the lives and natures of the people and animals of Darrowby is unparalleled. His description of his training in the RAF reflect a world that is entering World War II, and some of his stories reflect more serious matters such as dogs being poisoned with strychnine, and owners wanting to give up on life when their animals become incapacitated or die. Regardless, the reader is left with never ending belief that there is basic good in all people and in the animals in their charge.

All things bright and beautiful

All creatures great and small

All things wise and wonderful

The Lord God made them all

More summaries and resources for teaching or studying All Things Wise and Wonderful.

All Things Wise and Wonderful from BookRags. (c)2022 BookRags, Inc. All rights reserved.