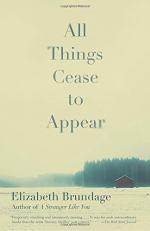 All Things Cease to Appear Summary & Study Guide includes comprehensive information and analysis to help you understand the book. This study guide contains the following sections:

This detailed literature summary also contains Quotes and a Free Quiz on All Things Cease to Appear by Elizabeth Brundage.

The following version of this book was used to create this study guide: Brundage, Elizabeth. All Things Cease To Appear. Vintage Books, 2017. Paperback First Edition.

In the rural town of Chosen NY, George Clare finds his wife, Catherine, murdered in her bedroom. He takes his daughter Franny to their neighbors to call the police. Sheriff Travis Lawton arrives and begins the investigation.

In the years previous, George and Catherine had an spotty romantic relationship while in college. After George breaks up with Catherine for the second time, she realizes she is pregnant. A few weeks later, George makes the hasty decision that they will get married and live together in New York City. They raise their daughter, Franny, in a small apartment until they purchase an old farmhouse in Chosen.

The Hale family used to live in the farmhouse. The parents, Cal and Ella, had a tumultuous relationship and Ella was frequently abused and cheated on. Their financial situation worsens and becomes desperate, eventually leading to Ella killing herself and Cal. Their three sons, Eddy, Cole, and Wade go to live with their uncle, but often sneak back to check in on the house. When they learn the Clare's have bought the house, they volunteer to do odd jobs for them.

George teaches art history at a nearby college despite lying about his credentials, and Catherine becomes a stay-at-home mother. They both feel painfully trapped in their situation, and their marriage goes from somewhat civil to miserable and hateful. Catherine meets Justine Sokolov, who inspires her to be more free-spirited and independent. George increasingly demonstrates his insensitivity and overwhelming need to control Catherine, and occasionally becomes violent with her. Catherine often feels afraid of her husband, but cannot leave him because of the pressure from her family and her daughter.

Meanwhile, George begins having an affair with a 19-year-old girl, Willis, who works at a local inn. George soon becomes emotionally abusive and manipulative, but insists on continuing the affair. Willis is deeply troubled and is the first to understand George's sociopathic behaviors, and desperately wishes she could escape him.

George's fear of being found out as a fraud at work or as an adulterer leads him to become increasingly violent, first with the department chair Floyd DeBeers, who he drowns, and then with Justine, who he runs off the road and whom subsequently falls into a coma.

Catherine resolves to leave George but a series of coincidences compounded with George's frightening ability to manipulate her prevents her from doing so. Eventually, there is no doubt that it was George who ended up killing her. Unfortunately, no evidence was ever found to indict him or any other suspect. Willis' father, a powerful defense attorney, ends up representing George.

Decades after the murder, Franny is revealed to be an emotionally stunted, unhappy surgical resident who never had the opportunity to properly grieve her mother. She returns to Chosen and through rekindling a relationship with Cole Hale and finding a letter written by her mother, she learns the truth. She ends up finding closure and tells her father she will never speak to him again. It is revealed she marries Cole. Willis also returns to New York as a District Attorney, and relaunches the investigation into Catherine's case. George, cut off from his daughter and going blind from diabetes, goes to the ocean on a sailboat and drowns.

All Things Cease to Appear from BookRags. (c)2022 BookRags, Inc. All rights reserved.