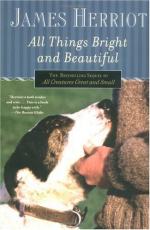 James Herriot
This Study Guide consists of approximately 41 pages of chapter summaries, quotes, character analysis, themes, and more - everything you need to sharpen your knowledge of All Things Bright and Beautiful.

All Things Bright and Beautiful Summary & Study Guide includes comprehensive information and analysis to help you understand the book. This study guide contains the following sections:

This detailed literature summary also contains Topics for Discussion and a Free Quiz on All Things Bright and Beautiful by James Herriot.

The novel "All Things Bright and Beautiful" details the life and work of country veterinarian James Herriot during the early years of his practice. Herriot writes his touching stories, which feature the antics of the animals he treats as well as their owners' eccentricities, from his own experience as an animal doctor in Yorkshire, England. Through his stories Herriot shares the challenges of his job as well as the fulfillment and joy he gains working with the animals.

The majority of Herriot's book tells the stories of many of the varied veterinary cases he worked with during his first few years after becoming a veterinary surgeon. He describes his experiences in a way that is both humorous and compassionate to the animals as well as their owners. Through his writing Herriot shows he has the ability to admit his mistakes and laugh at his own down failings as well as rejoice with the birth of a baby animal or the improvement of a sick patient. Siegfried and Tristan Farnon, the two brothers with whom Herriot works and lives, are common characters in Herriot's stories. These brothers, with their lively yet differing personalities, add to Herriot's stock of comical stories about the life and work of the average veterinarian.

Herriot's courtship of and marriage to Helen Alderson is another major theme in his autobiography. Herriot makes it known from the beginning of the book that he did marry his sweetheart but includes stories throughout the novel of their courting days. These stories show that Herriot did not always believe he would be Helen's husband. In fact there were many times Herriot felt he made such a fool of himself in front of Helen and her family that he would never stand a chance at marrying her.

Perhaps the most touching part of the book is the ending when Herriot is preparing to leave his pregnant wife because he has been called for duty with the Royal Air Force. Things have not turned out exactly the way he hoped they would. His practice is still young and he has little money to provide the necessities for his family. While he is away on duty, Helen will be going back to live with her parents because Helen and Herriot have been living in some empty rooms above the veterinary clinic at which Herriot worked. In these distressing circumstances Herriot remembers thinking that something pleasant was ending. He closes with the comment that with the perspective of age, he realizes that things then were just beginning.

More summaries and resources for teaching or studying All Things Bright and Beautiful.

All Things Bright and Beautiful from BookRags. (c)2022 BookRags, Inc. All rights reserved.