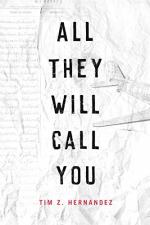 All They Will Call You Summary & Study Guide

All They Will Call You Summary & Study Guide Description

All They Will Call You Summary & Study Guide includes comprehensive information and analysis to help you understand the book. This study guide contains the following sections:

This detailed literature summary also contains Topics for Discussion on All They Will Call You by Hernandez, Tim Z. .

The following version of the book was used to create this guide: Hernandez, Tim Z. All They Will Call You: The Telling of the Plane Wreck at Los Gatos. The University of Arizona, 2017.

All They Will Call You begins with Part I: The Witnessing. In this section, Tim Z. Hernandez presents the testimony of the men and women, some young children then, as they watched the plane hurtle into the land just meters from them. Part II: The Stories details the lives of six of the people aboard the flight. Their stories are told through the memories of the friends and family who knew them. The six people described include: Luis Miranda Cuevas; best friends, Guadalupe Ramírez Lara and Ramón Paredes González; the young baseball fan, José Sánchez Valdivia; and Frank and Bobbie Atkinson, the pilot and pilot’s wife.

Part III: They’re Flyin’ ‘Em Back describes the roundup of some of the men on the flight. They were caught by immigration in San Bautista, California, and taken to an Immigration Detention Center. Part III shows how, from the detention center, they were then to be deported via plane. Part III imagines how the passengers reacted to the first few minutes of their first plane flight. Some of the men are excited, and some nervous. Part III also describes, in slow, attentive detail, how the pilots checked the plane, how the plane took off, and the first hour of the flight. Part III also imagines the various stages of the plane’s crash, from the smoke filling the cabin to the wing falling off. The final chapters of Part III are dedicated to the following investigation and funeral services.

Part IV: The Power of a Song (One More Name) turns to the history of the making and production of “Deportee (Plane Wreck at Los Gatos).” This part includes the author’s conversation with Pete Seeger, the first to sing the song written by Woody Guthrie, and the story of the suicide of Martin Hoffman, the song’s melody writer. The book concludes with a chapter, "The First Recording," that includes transcript of Martin Hoffman introducing the song and singing it to a melody for the first time.