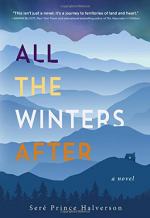 All the Winters After Summary & Study Guide

Seré Halverson
This Study Guide consists of approximately 57 pages of chapter summaries, quotes, character analysis, themes, and more - everything you need to sharpen your knowledge of All the Winters After.

All the Winters After Summary & Study Guide Description

All the Winters After Summary & Study Guide includes comprehensive information and analysis to help you understand the book. This study guide contains the following sections:

This detailed literature summary also contains Quotes and a Free Quiz on All the Winters After by Seré Halverson.

The following version of this book was used to create this study guide: Halverson, Seré Prince. All the Winters After. Sourcebooks, 2016.

Kache Winkel lives a life of quiet repression in Austin, Texas, until his girlfriend breaks up with him and he is let go from his job. Suddenly rudderless, Kache returns to his hometown of Caboose, Alaska to catch up with the only family he has left, his aunt “Snag” and his grandmother, Lettie. Kache's mother, father, and brother all perished in a plane crash 20 years before, and Kache has not been home since.

Upon his arrival, Aunt Snag admits that she has not been taking care of the family's cabin and its surrounding land because she, like Kache, found it too painful to return. As it turns out, the reason it is too painful for Snag is that she was in love with Kache's mother, a situation that had caused a terrible fight between her and Kache's father the night before the accident. She blames herself, presuming that Kache's father was distracted when he crashed their plane.

When Kache learns that the cabin and homestead have been vacant for 20 years, he rushes out to investigate and finds a young Russian woman named Nadia living there. Nadia is escaping her own tragic past. She was a member of the local sect of “Old Believers” with strict, regressive ideas about women. She had been married as a teenager to an older man who violently abused her. She staged a fake death scene so it would appear she had drowned, and ran away from the village where the Old Believers lived. She is hiding out in the cabin with the permission of Kache's grandmother Lettie.

Lettie, meanwhile, is in a nursing home reflecting on her life. As a young woman, she longed for Alaska, finally convincing her husband A.R to move there from Kansas. Though she had thought herself infertile, upon arrival in Caboose, then “Herring Town,” Lettie immediately conceived twins, Snag and Kache's father Glenn. Lettie devoted her life to cultivating the land and raising her children. Still, she regrets that she was not more helpful to Snag when she was growing up confused about her sexuality, and she feels guilty for taking A.R away from the home he loved to pursue her own dreams.

Kache and Nadia spend time together working on the land and things quickly turn romantic. Nadia helps Kache to rethink his troubled relationship with his father. They never got along because Kache was a sensitive musician, not a rugged outdoorsman like Glenn. Nadia is in a unique position to help because she has read Kache's mother's journals, which were left behind in the cabin after the plane crash. Kache tries to help Nadia in return by asking around about her abusive husband. The rumor is that he left the Old Believers' village long ago. Kache convinces Nadia to return to visit her family. He cannot get his family back, but perhaps she can get hers. She returns, but they will not accept her, as she no longer adheres to their faith.

A flourishing relationship with an attendant at her mother's nursing home allows Snag to let go of the pain of the past and move forward. She tells Kache the whole truth about the fight the night before the plane crash, and that she had been in love with his mother. He has a hard time accepting this at first, he is very angry, but when he gets in a fight with Nadia about her desire to go away to art school, he realizes that love can cause people to act selfishly sometimes.

Kache has been regularly performing with his high school band at the local dive bar. The night of the fight with Nadia, he sings a song about heartache, and he is heckled by a Russian man in the audience who he has spoken to at the bar several times before. The man makes a reference to a goat that was killed on the homestead's property recently, Kache and Nadia assumed by a predatory animal. Kache realizes that the man is Vladimir, Nadia's violent husband, but when he jumps down from the stage to find him, he is already gone.

Racing back to the homestead, Kache has to stop for gas, putting him several minutes behind Vladimir. When he arrives, Vladimir is holding Nadia hostage with a knife near a canyon on the property. The tense standoff ends when Nadia's dog attacks, and he tumbles over the side of the canyon. Kache descends after him to make sure he is dead, and sees his father's ghost, guiding him forward. It is a moment of redemption and reconciliation. Vladimir is mortally wounded, but not dead, and Kache shoots him.

Finally, Kache realizes he must let Nadia go on her own journey, he belongs on the homestead now, and she belongs at art school. They say their goodbyes. Shortly after Nadia leaves, Lettie passes away peacefully on the property of the homestead.

More summaries and resources for teaching or studying All the Winters After.

All the Winters After from BookRags. (c)2022 BookRags, Inc. All rights reserved.